A Walt Becker comedy for this Tuesday's edition of Overlooked/Forgotten Films and Television at Todd Mason’s blog Sweet Freedom. Don't forget to check out the other fascinating reviews over there.

Dudley Frank (Tim Allen): What'd you do, Woody?
Woody Stevens (John Travolta): I cut the gas lines of their bikes, and then I maybe blew up their bar. 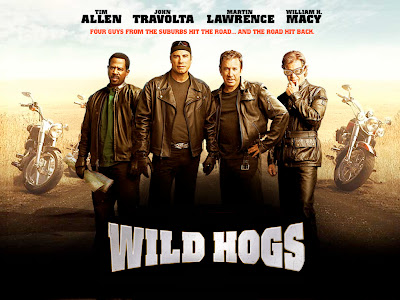 I am not a particular fan of John Travolta. I enjoyed Saturday Night Fever, Grease and Staying Alive—musical hits that launched his film career and cast the young, lanky, muscular testosterone-driven actor into public limelight. But those were early days and you can't judge Travolta by the way he danced, swore and grinned widely. A lot of people judge Travolta as an actor from his performances in Pulp Fiction and Face/Off, which left me confused by the end. I couldn't figure out who was Travolta and who was Cage.

Over the years John Travolta, who hails from New Jersey, acted in some fine movies which, amongst the ones I have seen, include The Taking of Pelham 1 2 3, Wild Hogs, Ladder 49, Swordfish, The Thin Red Line, Primary Colors, Broken Arrow, and Get Shorty. Mum's the word on the Look Who's Talking series—never did like it.

I liked Travolta best in Wild Hogs (2007). He is seriously funny in this riot of a film about four bikers who hit the high road and get into unforeseen trouble with a gang of professional bikers called the Del Fuegos led by the mean, nasty and sneering Ray Liotta.

Woody Stevens (John Travolta) joins his buddies Doug Madsen (Tim Allen), Bobby Davis (Martin Lawrence) and Dudley Frank (William H. Macy) on a bike adventure and end up in a small town whose sheriff, Charley (Stephen Tobolowsky), and his two squabbling partners are too scared to protect from Jack (Ray Liotta) and his gang. 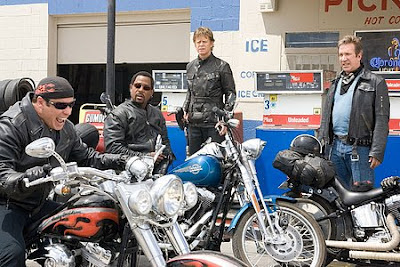 Actually, the Del Fuegos roar into town because they’re after the guy who tampered with their bikes, a guy called Woody. His friends, of course, don’t know anything about it. But when they do, they stand by him, like all good friends. What follows is nearly an hour of sheer fun as Woody and his pals indulge in a good deal of fisticuffs, filibuster and slapstick with the bike gang. And what was meant to be a simple bike adventure nearly turns into a messy affair as the four buddies stand their ground, shaky as it seems under their feet, in defence of the small town and its fun-loving folk.

Pick of the film is the bespectacled and bumbling Dudley Frank (William H. Macy) who is in his element as he spars with the dirt bikers on one hand and courts Maggie (Marisa Tomei) on the other, both with hilarious consequences.

Wild Hogs, see it if you haven't.