I used earthworms as bait to catch tiny crabs. I dug them out of wet earth, dropped them into a bottle and ran to the jetty. I put a hook into a wriggly worm, leaned over the side, and lowered the line past a million barnacles. A dozen crabs crawled out of nowhere and clawed at the dangling bait. When one got lucky and held on to its lunch, I pulled him up and checked him out. I let him have the worm and lowered him back into Mandovi river. He ate it without getting impaled. Fishing sure was fun. 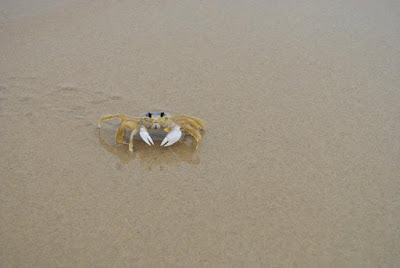 A peek at some Witty acceptance speeches by British actors for Tuesday’s Overlooked Films, Audio and Video over at Todd Mason’s blog Sweet Freedom.

When Peter O'Toole walked on to the stage to receive a well-deserved Honorary Oscar from Meryl Streep in 2003, there must have been an air of expectation among his celebrity audience who were probably eager to hear his rich and distinctive voice, and laugh at his wit and intelligent humour. It was a short speech but I'm sure he didn't disappoint them.

After greeting Streep and accepting the Academy Award from her, Peter O'Toole said after the extended standing ovation, and I quote him verbatim: 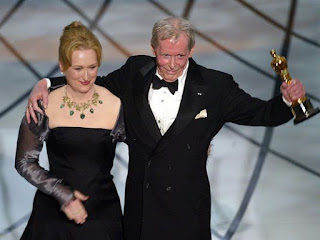 “Meryl Streep, members of the Academy, distinguished guests, viewers, ladies and gentlemen. Always a bridesmaid, never a bride—my foot! I have my very own Oscar now to be with me till death us do part.

“I wish the Academy to know that I am as delighted as I am honoured. And I am honoured. The magic of the movies enraptured me when I was a child. As I totter into antiquity, movie magic enraptures me still. Having already bagged this baby, as it were, and so spared uncertainties prior to the opening of an envelope, I'm able to think. I think of our colleagues, our old friends, now gone, who played their parts in this ceremony. I think of the sumptuous talents alive and well and with us now. I think of the astonishing young, the gifted and able young men and women who I meet practically every time I go to work and from whom I grab energy in handfuls. I think of the United States and of the loves and friendships I've known here for more than half a century, and of how much the nation has given to me both personally, privately and professionally. And I am deeply thankful. And now, at this last, you have given me this delightful shock. You're very good. Good night and God bless you.”

Years later, when I watched that Oscar night on YouTube, I marvelled at the renowned British-Irish actor's choice of words which evoked instant mental imagery and laughter. At one point, when O'Toole said, “As I totter into antiquity, movie magic enraptures me still,” his compatriot Michael Caine laughed out loud, and I couldn't help laughing with him.

It was a good acceptance speech, the kind of speech whose lines you remembered long after they were delivered. 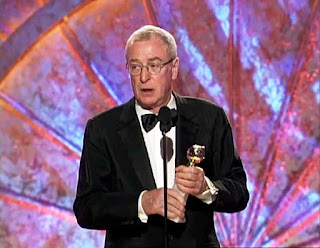 Over the years and until his passing in December 2013, Peter O'Toole was no less hilarious in his television interviews. He once rode in on a camel on David Letterman's The Late Show, reprising his famous role in Lawrence of Arabia, and proceeded to regale viewers and spectators with his disarming charm and humour. Except, he wore a suit and smoked a cigarette through a holder.

O'Toole comes from an impressive roster of British actors who are as witty in real life as they often are on screen—actors like Michael Caine, Hugh Laurie, Daniel Day-Lewis, Julie Walters, Colin Firth, Emma Thompson, Stephen Fry, Maggie Smith, John Cleese, Kate Winslet, Rowan Atkinson and Jim Broadbent, who deliver their lines with deadpan humour, be it in a speech or an interview.

In 1998, Caine had the audience in splits when he won the Golden Globe for Best Actor–Musical or Comedy for Little Voice, 1998. He opened his speech with this gem—“Oh, what a shock. My career must be slipping. This is the first time I've been available to pick up an award,” as if the awards were there for the asking. The rest of his speech was peppered with funny lines, which included the confession that he didn't work a lot without producer Harvey Weinstein. The Miramax co-founder was beside himself with laughter. 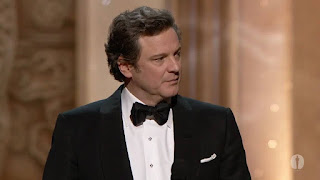 Colin Firth showed his funny side when he took home the Oscar for Best Actor for his role in The King’s Speech, 2011.

He said, “I have a feeling my career has just peaked. My deepest thanks to the Academy. I'm afraid I have to warn you that I'm experiencing stirrings. Somewhere in the upper abdominals which are threatening to form themselves into dance moves. Joyous as they may be for me, it would be extremely problematic if they make it to my legs before I get off stage.” Firth remained impassive throughout his speech which made his appearance that much more hilarious. Don't they feel like laughing too? They are, of course. masters of their craft and I suppose they can hide their emotions. Or, maybe, they don't mean to be as funny as we think they are.

I watch award shows like the Oscars, Golden Globe, American Film Institute, Emmy, and the Mark Twain Prize for American Humor only for the acceptance speeches, in the hope that some of the winners will make me laugh with their wit and wisecracks, and liven up my day just a bit.
Written by Prashant C. Trikannad at 09:24:00 14 comments: 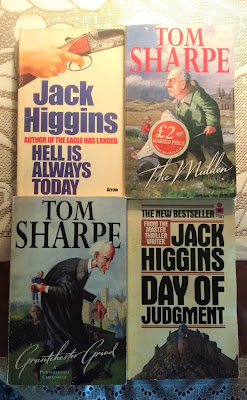 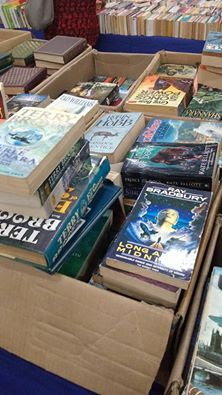 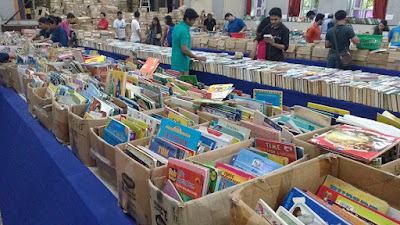 A book pilgrim’s journey to Books by Weight 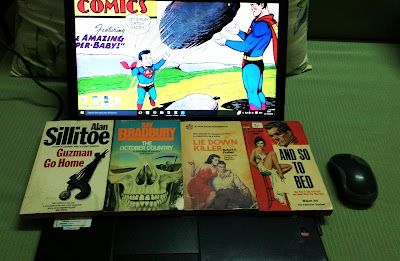 I was a model of restraint during my biannual pilgrimage to the Books by Weight exhibition at Churchgate in South Mumbai, last week. I picked up only four used paperbacks in mint condition. The books had a familiar musty smell, as if I’d pulled them out of a rusty trunk in the attic. I like the way old books smell. Some people religiously sniff pages of novels and newspapers before reading them. It’s supposed to bring good luck. A quaint habit and one I indulge in occasionally. 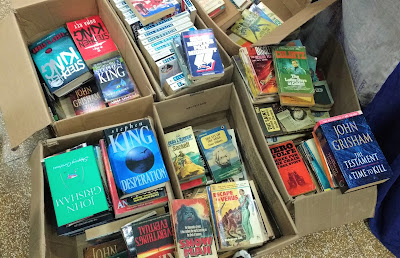 The four titles I picked up, out of a million-odd books, were Guzman Go Home by Alan Sillitoe, another of my favourite authors; The October Country by Ray Bradbury, whose paperbacks have some of the best illustrated covers; And So To Bed by William Ard, whose western novels I’ve read as Jonas Ward; and Lie Down Killer by Richard S. Prather, whose crime and mystery have been on my wish-list for a long time. See the topmost picture. 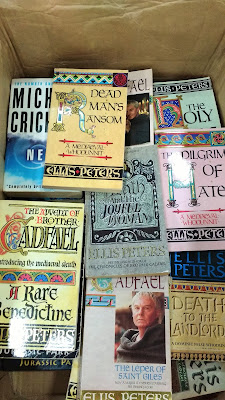 I found these in one of a dozen open boxes strewn across the floor in the large and roomy auditorium at Sunderbai Hall. There were at least two cartons filled with mid- to late 20th century fantasy, sf and horror novels mostly by authors I’d never heard of. I can’t imagine what I missed, especially since I was the only one pouring over this section. Most people were picking up popular and contemporary authors, such as, Stephen King, James Patterson, Michael Connelly, Danielle Steel (still widely read in India), Jonathan Kellerman, Elizabeth Gilbert, Peter James, Mary Higgins Clark, Ian Rankin, Joanna Trollope, Ellis Peters, and J.K. Rowling, to name a handful. 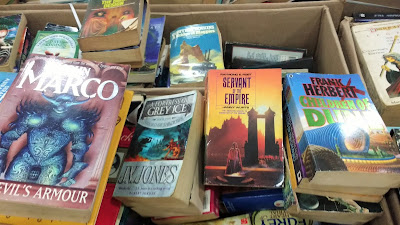 Apart from the boxes, there were eight rows, each the length of a bowling alley, stacked with hundreds and thousands of paperbacks and hardbacks across several categories. The books were pressed so tightly against one another, their spines facing upward, I was afraid they’d suffocate to death. Books have life, after all. 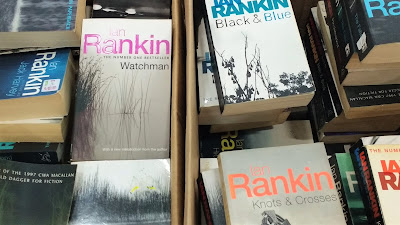 The one carton I eyed with unconcealed glee at Books by Weight was the one that contained my most favourite writer—Jack Higgins (Harry Patterson). I pulled out many of his Book Club hardbacks only to drop them back into the box. I’d enough of his novels at home. And yet, when it comes to books, there’s never too much of a good thing. 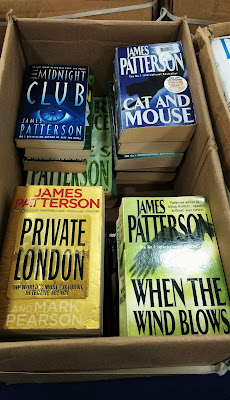