Creativity in the classroom

A sudden spark of creativity prompted my son, Thayn P. Trikannad, all of 12 years and in 8th grade in St. Dominic Savio High School, Bombay, India, to write the following ode to his sports day. He won his teacher's appreciation.

My sports day was great
It's hard to say
But I'll express it this way
We had lots of games
And loads of fun
So many names
To make us run
I love sports day
Just can't wait
Until next year
When they open the gate!
Written by Prashant C. Trikannad at 02:44:00 No comments: 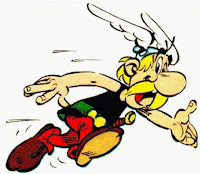 So Asterix turned 50 last week. So what? We all do except for one small detail—Asterix is immortal. And he doesn't even need the magic potion equivalent of the nectar of the gods. Goscinny and Uderzo's brave Gallic warrior will live long after we are gone.

So will Tintin—the indefatigable Belgian reporter created by Georges ‘Hergé’ Remi—who turned 80 in January this year.

You are never too old for some things in life, such as comics, Enid Blyton and jigsaw puzzles, and I am grateful that I can still read and savour, as many times as I want, the adventures of two of the greatest characters in the history of comic books. Snapping at their heels, playfully, are the endearing “husband-and-wife” pair of Tom & Jerry. There, I have said it. 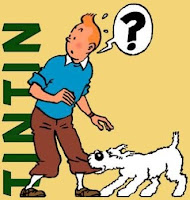 Be it Asterix and Tintin or Phantom and Mandrake, why do fans react to comic book milestones in an almost identical fashion? Mention comics and the first thing they do is jump into the time capsule and blast off into the past, usually to a fount of childhood memories, and recollect the many hours spent reading a wide assortment of comics. You will see a kinda dopey look on their faces as they reminisce. It doesn’t go away soon.

I know it sounds crazy, but the other thing I noticed about Asterix-Tintin fans is that they talk about them as if they are sole heirs to, and the only ones who read, them. Listen to me.

You saw it happen when Asterix turned 50, when out-of-print Indrajal comics were suddenly back in demand, when the controversial Tintin in the Congo was released in 2005 or when Lee Falk, creator of Phantom and Mandrake, died in 1999. 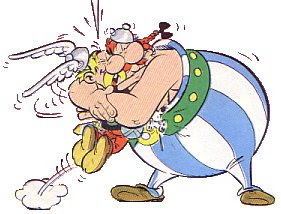 I suppose it’s because we associate comics with the carefree joys of childhood, a period filled with innocence, laughter and magic realism; and my guess is that we refuse to grow up so that we can dive between the pages of our prized comics, with their colourful characters and speech bubbles, and lose ourselves anytime we want—our own private little haven.

We fans are crazy!

I have my share of dopey-eyed reminiscences too. I first met Asterix and Tintin, and their pals Obelix and Dogmatix and Snowy, Capt. Haddock and Prof. Calculus, when I was eight years old. My father brought them home from the circulating library and they haven’t left since. I remember he would sit cross-legged and hunched up on his bed, place the comics on the pillow, and read them. Every now and then I would hear sporadic bursts of laughter from his room. In fact, he used to laugh so loudly, that the bed would shake and move with him, as if the room was struck by a mild tremor.

In the years since then, I was introduced to a galaxy of heroes and superheroes from the infectious world of comics.

Instead of pontificating over Asterix and Tintin—like there is something about the comic duo that hasn’t been said already—I would like to share a few things about why these comics are hugely successful. Nothing new there either but I got to fill up my next speech balloon. So here goes…

Let’s put the fantastic art and storyboard aside. I seriously doubt whether Asterix or Tintin would have been as funny and captivating if they didn’t have a buddy (or buddies).

For instance, imagine Asterix without his boar-gorging, menhir-delivery, Roman-bashing friend Obelix. Alone, the Gallic warrior is never really as funny as he is with Obelix. On the other hand, left to himself, Obelix can be a riot. 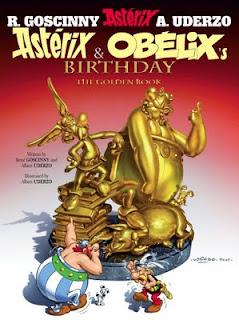 In fact, several of Asterix's neighbours in the village of indomitable Gauls, most notably, Unhygienix, the fishmonger, and Fulliautomatix, the smith, who are always fighting; chief Vitalstatistix who is frequently ‘let down’ by his shield-bearers; Cacofonix the bard who loves singing while everyone else thinks he is unspeakable; and Geriatrix the oldest inhabitant who, when excited, brings his wooden stick down on Fulliautomatix’s foot—are often funnier. 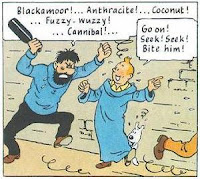 Ditto for Tintin, whose solo acts in comics like The Black Island, The Broken Ear and Tintin in America, are no patch on other titles where he is paired with Haddock, the bearded, drink-loving, foul-mouthed captain with a heart, and Calculus, the brilliant but hard-of-hearing, little-to-the-left pendulum-swinging scientist.

Now read the above three titles and then read Tintin in Tibet, Red Rackham's Treasure and the two-part Destination Moon and Explorers on the Moon and you’ll see what I mean.

Most rib-tickling “couples” in comics and movies are seldom funny on their own. Their magic appeal lies in being together and doing their stuff together. Thus, you can’t think of Laurel without Hardy, Tom without Jerry, Mutt without Jeff, Bud Spencer without Terrence Hill, Calvin without Hobbes, Hägar without Lucky Eddie, Sadsack without the Sarge, Thomson without Thompson, Dennis without Mr Wilson or Lucky Luke without Jolly Jumper…and vice-versa.

Finally, the question on everyone’s lips: who do you like more—Asterix or Tintin? Ouch!

Recommended articles: Mr Walker's last mile by Vir Sanghvi at www.rediff.com/news/1999/mar/29vir.htm and Forget the critics, my vote goes to Tintin by Vir Sanghvi at www.livemint.com/2008/01/24235725/Forget-the-critics-my-vote-go.html
Written by Prashant C. Trikannad at 03:13:00 1 comment: