Million Dollar Arm, directed by Craig Gillespie (Fright Night, Mr. Woodcock), is the true and inspiring story of sports agent J.B. Bernstein who travels to India to recruit two young and talented cricketers who can throw a ball really fast—and takes them to America to train for Major Baseball League. 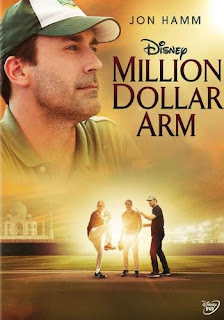 However, JB, nicely essayed by Jon Hamm (Mad Men), is in for a surprise when he realises, much later, that the boys he has selected from a small rustic village are actually football fans. But that little detail doesn't get in the way of things.

Do the young teenagers fulfil JB’s dream, and their own, in a foreign land—or do they let him, and themselves, down?

I liked this film for its Indianness—the long search for the right candidates in the colourful and vibrant countryside; the customary village send-off for the two lucky boys, with garlands and teary-eyed farewells; their struggle to adapt to a new language and culture; the offering of prayers the Hindu way; yoga with JB's charming neighbour Brenda (Lake Bell); and the growing friendship between JB and the boys. An Indian interpreter lends a nice touch of humour on the journey to baseball glory.

By the end of the film, JB is humbled by his experience and therein lies the beauty of Million Dollar Arm, which should appeal to fans of both cricket and baseball.

Western films set in and around India—Bend It Like Beckham, The Best Exotic Marigold Hotel, Life of Pi, The Hundred Foot Journey, and many others—are a delight to watch on English movie channels.

Beyond the Rest of Us by Andrew Man

Beyond the Rest of Us by Geneva-based writer Andrew Man is the third standalone novel in his Tego Arcana Dei Series, which tells the magical, mystical, and mysterious adventures of the “deeply flawed but unforgettable James Pollack through 200 years.”

In Beyond the Rest of Us, due for release next month, “A retired Swiss banker is kidnapped at a Geneva hotel for crimes he doesn’t understand. An Italian cruise ship crashes into rocks in the Tyrrhenian Sea. A respected American scientist disappears into thin air. And a British secret agent follows a trail of corrupt power.”

Here is a more detailed synopsis of the book.

Winter 2013, James, a Swiss-banker from the recent past, another baby boomer, is enjoying retirement in the small town of Geneva, Switzerland. He has a dark past from his active days in banking, an even more difficult history with Italian women and the unpredictable—and less common—ability to astral travel. When Pollack is targeted by an undercover corrupt European operation and dragged back in time to 1814, he has to use all his skills to work out who is behind his abduction and what they really want from him and his cell mate, The Professor.

Against a backdrop of a disintegrating and unscrupulous world—from rising unemployment, borderless controls and a time-bomb of illegal immigration, unchecked climate change and impotent governments—Beyond the Rest of Us not only provides a roller-coaster ride of an action thriller but shines a spotlight on the current world climate.

The book—published by authoright.com—is described as a poignant and fast-paced thriller that would appeal to fans of Dan Brown on one hand and John Le Carré on the other.

Below is a brief synopsis of Books 1 & 2 in the Tego Arcana Dei series.

Britain is suffering under recession, and James Pollack leaves to work for a bank in Switzerland, only to return to the Caribbean island of Antigua for a meeting. Her name is Gina; her client is the Commander of one of the world's most powerful agencies. The couple plunges down the rabbit hole into a dizzying, mystical adventure, and American powers collide with secrets at the Vatican summer palace. Keeping God's Secret takes James back to the shadowy corridors of Italian banking, his excitement heightened by memories of his escape in Rome with a young female lawyer, who leads him on to the South of Lebanon to a woman he is willing to risk his life to save.

Forces of Retribution, the second book in the series, follows James Pollack from a war in Lebanon in 2006 to the mysteries of the Pyramids in Egypt. The storyline is set in backdrop of the banking crisis of 2008, as world leaders try to prevent a global meltdown of the financial system. The novel tells a human interest story—an expecting mother battling to save her baby on a train ride across Europe.

A spokesperson for authoright.com wrote to me asking if I’d be interested in reading (and probably reviewing) Beyond the Rest of Us, which sounds more promising of the three novels. At this point I'm not sufficiently convinced I want to.
Written by Prashant C. Trikannad at 05:35:00 7 comments:

I won't be blogging until next week as I heard only this evening that a very dear aunt of mine, the pillar of our family, passed away. I'll be away for the weekend.
Written by Prashant C. Trikannad at 09:42:00 19 comments: