Nothing is sacred anymore, not even Scrabble. One of the world's most popular board games, Scrabble is doing a 360° turn. News has come in that US toy giant Mattel, which owns the game and has sold an estimated 150 million sets worldwide, is spicing up the board game in a way that already has traditional lovers of the game scrabbling for cover and screaming "double letter" and "triple word" cuss words. 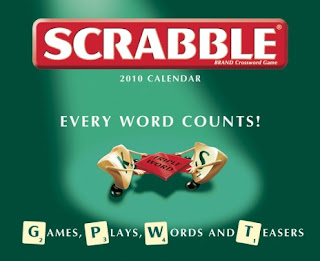 Mattel is reportedly changing the rules of the game, invented by architect Alfred Mosher Butts in 1948, to allow the use of proper nouns, like names of places, famous people and companies.
As a story on The Washington Post website noted, "To Scrabble purists, this would be like lowering the height of the baskets in the NBA, or doing away with the net in tennis. Suddenly, any idiot could spell, say, "Bjork", and score a quick 18 points."
So, for every "Beyonce", you will have a "Barack". Ditto for "India" and "England". Or, "Pepsi" and "Walmart". Throw out the dictionary and bring in the encyclopedia!

But wait, it gets worse. It seems players can spell words backwards and upwards, and even place words unconnected to letters already on the board. "Unconnected", did they say?
Here's my own rule, No.3: two players can now sit facing each other across one board and play at the same time without having to play with each other. Or, make that two pairs of players without one having to play with the other, if you like. Is Mattel listening?
The toy company is dead serious about savaging the 62-year old game’s rules, the first time in its history. Mattel expects the changes to add a "new twist" to the board game. "We believe that people who are already fans of the game will enjoy the changes and they will also enable younger players and families to get involved," The Telegraph of UK quoted a Mattel spokeswoman as saying. Thankfully, Mattel will continue to sell the board game with the original rules.
Even if they don't, you and I can still play Scrabble the traditional way.
Recommended article: Beyonce on a triple-word score? Scrabble to upset purists with 'dumbing down' rule change at www.dailymail.co.uk/news/article-1263658/Scrabble-upset-purists-proper-noun-rule-change.html#ixzz0kPAGYTZi
Written by Prashant C. Trikannad at 03:51:00 No comments: