The Little King by O. Soglow 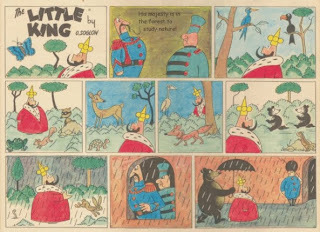 Mutt and Jeff by Al Smith

Can you actually die of boredom? A new study by researchers at University College London claims that it can. The findings reveal that those who reported feeling a “great deal of boredom” were more likely to die young. This is because those unhappy with their lives turn to unhealthy lifestyle habits such as smoking, drinking and overeating, thus, cutting their life expectancy, scientists explain. The study found a link between boredom and heart disease.

Fortunately, boredom, unlike depression, is not an illness and can be easily treated, with a non-medical prescription. Over a period of time, however, boredom can lead to depression. But that’s another story.

The findings are as relevant to India and elsewhere as they are to the UK where the study was conducted.

More and more people in India, particularly the young and the frantic, are complaining of boredom than ever before. These days you are more likely to hear people in their teens and twenties repeatedly say “I am so bored” or “My life sucks!” It’s also become fashionable to parrot these words. Either way it’s not a very healthy sign.

Boredom—the feeling of being bored or uninterested—comes from a total lack or absence of mental and physical activity or occupation. The irony is that even if you are doing something, you could still be bored, simply because you find the task on your hands dull, repetitive or tedious.

Those who complain of boredom have no right to say they are bored. It implies that they can find enough things to do if they want to, but they choose not to. In other words, they are plain lazy or preoccupied with themselves actually doing nothing. Imagine that!

I know people, on the other side of boredom, who complain of having too little time to do all the things they want to do. They must wish they could buy other people’s boredom, like carbon credits.

On a simple note, you can break boredom by forcing yourself out of your self-imposed mental stupor and cultivate existing or new hobbies and creative pastimes, turn to the mystics, be among friends, or take up causes with a purpose. This will help you pull yourself up, not to mention those putting up with you. Boredom can be infectious sometimes.

Boredom is also often associated with loneliness or emptiness, but it need not necessarily be so. If I remember correctly, it was Khushwant Singh, the celebrated Indian author and columnist, who once said, “I may be alone, but I am not lonely.” That is so true.

Remember, there’s always plenty to do, there’s never enough time to do it. So, be a bore if you like but don’t be bored.
Written by Prashant C. Trikannad at 03:55:00 No comments:

It's a little over a year since Barack Obama created history and already the shine and gloss is wearing off his presidency. Suddenly he's looking like any other US president.

America's first African-American president steamrolled into the White House on the grand slogans "Change we can believe in" and "Yes we can". Just twelve months in the Oval Office and everyone, fans and foes alike, are asking "Can he really?"

The Obama presidency was nothing short of a miracle or two. The first miracle happened when he defeated John McCain, though that was expected. The second, his promise of change, is still awaited by Americans and the rest of the world. 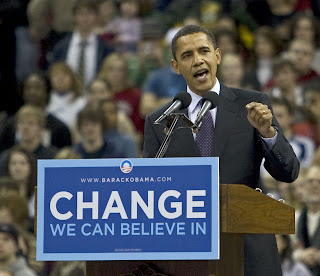 The question is not whether he wants to bring change as he said during his election campaign—of course he does, who doesn't want to play god—it's whether he can make a change that Americans can believe in.

For now, the odds are against Obama and it will be a while before he can bend down and pick up the baton of change and dash to the finish line. His popularity ratings have dipped. The US economy is yet to come out of recession. Unemployment is still on the rise. His healthcare reforms are under fire, and pending. He shocked many by sending more arms and men into Afghanistan. Last year he refused to meet the Dalai Lama to appease China. He tried to foist a last-minute climate change deal on the developing world. In a major political upset last month, the Reps snatched the late Ted Kennedy's Senate seat in Massachusetts, held by the Dems since 1952. And there's plenty where all that came from. Clearly, Obama has a big fight on his hands.

There is palpable disappointment amongst many who actually thought Obama would, like some medieval conjuror, make hope and change materialise out of thin air, and that everyone would live happily ever after. Nothing of the kind is going to happen. Obama may be an extraordinary president, but don't forget he is also an ordinary person, subject to human frailties that are common to you and me. He is more likely to fall before he rises, more likely to fail before he succeeds. But, the seriousness of intent and purpose of his presidency cannot be mistaken.

The hype and hoopla surrounding Barack Obama's spectacular victory will fade in due course of time. What will stay alive in public memory, though, is how he conducts himself, both as a president and a person, over the remaining three years of his term. From here on, should he fail to live up to the great expectations that have fallen to his lot, there will be neither hope nor change—probably not even a second term.

Recommended article: The Muddled Selling of the President at www.nytimes.com/2010/01/31/weekinreview/31stevenson.html
Written by Prashant C. Trikannad at 08:22:00 No comments: