Drink with the Devil by Jack Higgins, 1996 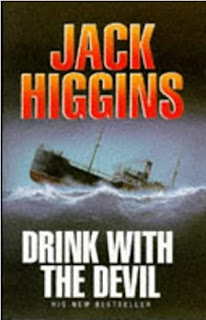 I read Drink with the Devil—the fifth appearance of Jack Higgins' trademark hero Sean Dillon—before the pandemic and decided to finally review it in my sixth month of work from home. Somehow, I always seem to pick up a Higgins to revive my blog every few months. Maybe because he is my favourite action-thriller writer and also my comfort read.

In Drink with the Devil (1996), Higgins offers a glimpse into Dillon's early life—first as a disillusioned IRA assassin, then as a skilled mercenary for the PLO and the Israelis, the KGB and the Red Brigades, and finally as an operative for a highly secret British intelligence unit answerable only to the prime minister.

The IRA sends Sean Dillon—as Martin Keogh—to team up with a legendary Irish militant (Protestant/Loyalist), Michael Ryan, and his young niece Kathleen, who hijack a truck laden with gold bullion worth £50 million. The IRA doesn't want Ryan to use the bullion to buy arms and start a civil war back home. Luckily for Dillion, things don't go according to plan. One late night, he and Ryan are transporting the bullion truck by a hired boat across the Irish Sea. But the scheming crew with plans of their own forces them to blow up the boat and send the bullion plunging to the bottom of the choppy sea.

Michael and Kathleen are dead to the world, including to the IRA and British intelligence; the priceless cargo never recovered. Michael is serving 25 years in a New York State prison for a failed bank robbery and shooting a policeman. His niece, who works as a nurse at a nearby hospital, meets him every day. They have assumed the names of Liam and Jean Kelly. 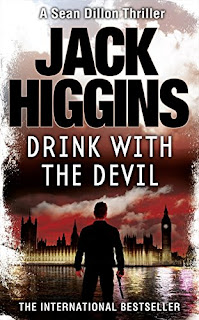 But word of the lost bullion reaches the mafia family of Don Antonio Russo, who strikes a deal with Michael and Kathleen—a share of the gold, now worth £100 million, and their freedom. Word also reaches the US and British intelligence services, the president and the prime minister, and the IRA.

Enter Sean Dillon. The former IRA hitman is tasked with a single mission—prevent the gold from disrupting the peace process between the Catholics and Protestants. He meets his "old friends" a decade later, and therein lies the proverbial twist in the tale.

While I haven't read many of the nearly two-dozen Sean Dillon novels, I can venture to say that Drink with the Devil is not his best. I thought the story, though evenly paced and with a fair amount of action and plenty of dialogue, was somewhat weak. It gave me the impression that even an amateur could have got away with stealing the gold. It also left me wondering how British Intel could not have traced the hijacked bullion or the whereabouts of Michael and Kathleen. They can't just have been lost at sea or disappeared into thin air.

In Higgins' defence, though, Dillion, his boss, Brigadier Charles Ferguson, who heads the secret unit known as the Prime Minister's Private Army, and Special Agent Hannah Bernstein, come into the picture much later; in 1995, when the story of the Irish Rose under the Irish Sea actually begins. 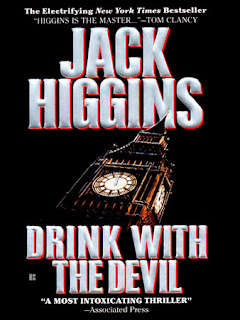 That aside, Drink with the Devil has all the hallmarks of Higgins' simple, to the point and conversational storytelling style. The characters, including the appearance of his other endearing hero, Liam Devlin, and the charming Lake District setting in northwest England, with its pubs and cafes affiliated either to the Republicans or the Loyalists, make the novel a fairly entertaining read. As with many of his IRA-linked novels, Higgins weaves the Northern Ireland conflict and its assorted players into his narrative, which, as a history buff, I find very interesting to read.

Whatever the pros and cons, it is a pleasure to read Jack Higgins.