But to live is to suffer, Danny Fisher…

I first read A Stone for Danny Fisher by bestselling author Harold Robbins at the age of 15. An uncle of mine suggested I wait a few years before I read anymore books by the king of pulp fiction, perhaps worried about their influence on my young mind. And that went for Irving Wallace too. 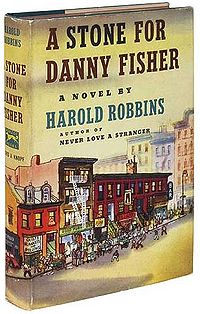 Instead, he recommended A.J. Cronin, the Scottish physician and novelist, best known for The Citadel, The Green Years, Hatter's Castle, The Stars Look Down and The Keys of the Kingdom. It was sound advice. My own favourite has been Beyond This Place, but more about that some other time.


I remember liking A Stone for Danny Fisher the first time, as did many readers of my generation, but not so when I reread the novel recently. I put it down to a case of “moving on” to more intellectual stuff.

A Stone for Danny Fisher is racy and fast paced and keeps the reader engaged, though not engrossed, to the extent that you can finish the book in one sitting, inside of a couple of hours.

The story of Danny Fisher is the story of the quintessential American middle-class family struggling to make ends meet during the period of the Great Depression. Danny, himself, is born in a lower-middle class Jewish family but dreams of making it big, by hook or by crook. From a boxer in his teens to a racketeer in his twenties, Danny yearns, at least, for half a good life. Getting there proves to be a difficult journey, along which he finds love, braves tragedy, cherishes hope, renews faith, and rediscovers family values.

The central theme of the novel is Danny’s single-minded purpose: reclaiming the house his father bought on his birthday, when he was a little kid, and lost to overwhelming poverty. It is to this cherished house that Danny returns and where he meets his inevitable death. His final resting place…

There is a line towards the end of the novel, as Danny lies dying, that goes, “But to live is to suffer, Danny Fisher… Surely you must know that by now.” Rather depressing, when poverty stares you in the face page after page and you yearn for Danny Fisher to make it at least in the end. He both does and does not.
Written by Prashant C. Trikannad at 03:52:00 No comments: