A review of a not so entertaining foodie movie for Tuesday’s Overlooked Films, Audio and Video over at Todd Mason’s blog Sweet Freedom. 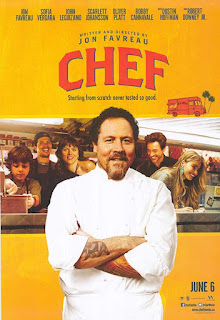 Film promos can be deceptive. What you see on the menu is not what you're always served. For more than two weeks, a movie channel tantalised viewers with the aroma of Chef (2014) before plating it up and laying it in front of us Sunday night.

Day after day we watched star chef Jon Favreau spit out the words, “You sit and you eat and you vomit those words back! It hurts!” We knew they were aimed at someone, probably an unhappy diner who’d tasted his food and actually spit it out. Was it Scarlett Johansson or Robert Downey Jr.?

Finally, when we sat down to watch the film at dinner time, last weekend, it turned out to be food critic Oliver Platt who’d panned Jon’s food on his popular blog and hurt his gastronomical pride.

Less than an hour into the film, we'd a mild case of indigestion as the foodie movie failed to home deliver what its much-hyped trailer had promised. Writer-director Jon Favreau took us through the gastric motions, and his own emotions, as he desperately tried to get his cooking mojo and his divorced life out of the freezer and back on the burner. An unpalatable war of words with Platt on social media and a falling out with his boss Dustin Hoffman saw Jon unexpectedly in a rolling food truck, with his young son, Emjay Anthony, and best friend, John Leguizamo—cooking food on his own terms, reconnecting with his family, and regaining his precious chef’s reputation.

The first time I read about orcs, the hideous and beastly human-like creatures, was in Harvest of War by blog friend Charles Gramlich. I reviewed his fantasy short story last month. Some days later he mentioned that writer Tom Doolan of Wisconsin, USA, was offering his story about orcs free on Amazon. I did not need a second invitation. I downloaded Blackskull’s Captive immediately, read it in one sitting, and thoroughly enjoyed it.

Having never read about orcs in J.R.R. Tolkien’s magnum opus, I was delighted to have read two very fine orc tales back to back. The stories widened my horizon. I was also pleasantly surprised to read that Tom had dedicated his story to Charles Gramlich, author of fantasy, horror, and sf, and Scott Oden, writer of historical novels.

Young Jack Monro is the sole human survivor of a brutal assault by bloodthirsty orcs who destroy his spaceship, HMS Mandrake, and take him captive aboard their own, the Grishnaak. Jack doesn’t go down without a fight and even kills an orc to prove he is made of sterner stuff. Blackskull, the captain of the enemy ship, a particularly huge and brutish orc, takes a fancy to Jack and makes him his cabin boy.

Jack is frightened beyond imagination, as he spends the first few days locked up in the orc captain’s closet. But he is also a brave and spirited lad who overcomes his fear of the repulsive humanoids and plots his escape from the foul-smelling orc ship.

The 32-page story is narrated in first person by Jack, who soon wins the trust of the captain and is allowed to move freely on the ship. The orc crew leave him alone though many eye him with “suspicion and amusement.” As Captain Blackskull and his orc crew stalk the space lanes and ambush and plunder more human ships, Jack quietly explores the bowels of the Grishnaak from whence he must escape.

Blackskull’s Captive is a combination of fantasy and science fiction, and an adventure of high order. It has several twists and turns, and there is not a dull moment in the clean narrative. I liked the writer’s description of the orcs and their predatory nature, the terrifying battle between the horrid creatures and courageous humans, and the inventive mechanism of the Grishnaak. But what I liked most about the story is the skilful manner in which Tom Doolan lightens up the air despite throwing Jack Monro into a very frightening and mind-numbing situation. A fine blend of fear and fun.

I will be reading more orc stories by Tom Doolan. Recommended.
Written by Prashant C. Trikannad at 09:34:00 14 comments:

Run Girl by British writer Eva Hudson is the first of five novels in the Ingrid Skyberg FBI thriller series. I downloaded it from Amazon partly because I liked the plot and partly because it was free. As a rule I don’t purchase ebooks by new writers, at least not right away. But now that I have read the first adventure of special agent Skyberg, I'm curious to read the other four and see how her character develops and what she gets up to.

Although Run Girl has been marked as a “thriller,” I thought it read more like young adult fiction and Ingrid Skyberg could have been Nancy Drew, only stronger and more sophisticated.

The young and attractive special agent is in London, for a dreary FBI training programme at Scotland Yard, when she is whisked away to the American embassy in a black sedan. Ingrid soon learns why. She must find an 18-year old missing girl before news of her disappearance leaks out and all hell breaks loose.

Rachel Whiiticker was accompanying her grandmother, US Secretary of State Jayne Whitticker, on a diplomatic trip to Paris when she decided to give her bodyguard the slip and run off to London, to meet secretly with her boyfriend and have a little adventure of her own.

The mandarins at the American embassy want to keep the crisis under wraps lest the political and diplomatic fallout of Rachel’s disappearance jeopardises a peace deal being brokered by her grandmother between warring African countries.

There’s just one problem: the Secretary of State doesn’t know her favourite grandchild is missing.

Run Girl is a well-written story though it meanders through a series of false leads and hot pursuits as Ingrid Skyberg and Nicholas Angelis, a private security agent hired by the US embassy, race against time to track down Rachel and bring her back. The narrative is fast paced but it lacks the suspense and solidity that I expect in an FBI thriller. Still, I enjoyed the story. I thought it was inventive.

You can check out the book at Amazon and learn more about Eva Hudson and her books at her website.
Written by Prashant C. Trikannad at 06:49:00 18 comments:

I have not been frequent on blogs, my own as well as visits to yours, because of the transition from my old job to a new one which, incidentally, happens to be in the same group I have been associated with for the past fifteen years. Only my line of work has changed, from that of a full-time journalist to a content specialist in one of Asia’s leading public relations agencies. I started out on July 2 and I'm looking forward to my new career in this challenging and exciting field.

I hope to make up for my absence from blogging this weekend, by visiting my friends’ blogs rather than posting anything on my own. That may take a while. However, I owe my friend Sarah Ward an honest apology. I still have to review her brilliant debut, In Bitter Chill, that she so kindly sent me by post a month ago. I'm halfway through Sarah’s gripping mystery novel and I'm excited about reviewing it next week.

My new job falls midway between my home in a northern suburb and my old job in South Mumbai, or downtown, which means I will have less time to read during my train commute. I'm going to have to make up for it by reading whenever time permits, and time doesn’t permit a lot. You know, we readers have as little time to read our books as sleuths have to solve their cases.

Among other things, it’s nearly three months since I bought a paper book, and I don’t intend to buy any till I have read at least two dozen paperbacks from my existing lot. This is a promise and I aim to keep it. The only exception would be Sudden novels, the western series by British writer Oliver Strange that I'm so fond of. Nothing, absolutely nothing on earth, can prevent me from grabbing his priceless books. To hell with TBR and all that.