This short novel by Eva Wilder Brodhead is my contribution to Friday's Forgotten Books over at Patti Abbott's blog Pattinase. You'll find plenty of good reviews of good books over there.

“Life,” he wrote, was at best “a rough proposition.” 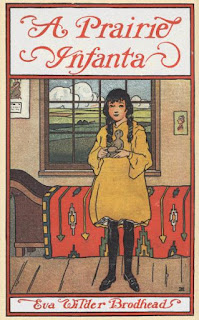 It’s certainly a rough proposition for the Texas-born Keene, who, upon the death of his lovely Mexican wife Margarita, leaves his young daughter Lola in the foster care of a stranger and goes away to a mountain camp, to prospect for coal and, some day, return a wealthy mine owner.

Eva Wilder Brodhead (1870-1915), the American writer and poet, has written a charming story about the love and sacrifice of Miss Jane Combs for the sake of the motherless child Lola, a precocious girl of ten or twelve.

Jane, who lives alone in a shack just outside the little Colorado mining town of Aguilar, is more than happy to take Lola under her wing. She accepts the girl as her own no sooner the local doctor, a kindly man, and Keene besiege her to look after Lola in the latter’s absence.

Understandably, Lola has a streak of rebellion in her—her mother has just passed away and her father has “abandoned” her. She refuses to move in with Jane whom she distrusts and whose house she finds ugly. Instead, she approaches Senora Vigil, a Mexican woman who lives next door with her large family. Being half-Mexican, the girl wants to be with her kind of people. It doesn’t help matters that the Vigils don’t get along with Jane because of a dispute over a piece of land. Jane wants to return it to the Vigils but the law won’t let her.

The Senora, in spite of her affinity with Lola, is reluctant to take the girl in as she has been left in Jane’s care. Nowhere to go, Lola decides to follow her father and runs away from the town but she soon finds herself in trouble—trapped in a deep gorge and on the verge of being swept away in a thunder storm. However, local cowherd Bev Gribble rescues her and takes her back to town where she is restored to Jane.

The next fifty-odd pages of the ebook describes the relationship between Jane and Lola and how the girl eventually realises the true worth of the woman, a complete stranger, who loved and cared for her as she would her own daughter—to the extent that the girl, who grows up into a vibrant teenager, scarcely remembers her own mother and rarely talks about her father’s return.


A Prairie Infanta is the tender story of a noble woman whose sacrifices for the well-being of the girl are never too much, a woman who does everything in her grasp and capacity to keep her “daughter” happy. Jane does more than feed Lola or clothe her in finest dress. She also sends the girl to a paid school by mortgaging her house. When Keene fails in his prospect and desperately writes to Jane for funds, which he believes his daughter earns through housework elsewhere, she sends him money from her own meager savings.

Lola, of course, doesn’t suspect a thing. It’s only in the end that the full scale of Jane’s sacrifice is revealed to her, by no less a person than her own father who one day returns as a wealthy mine owner and shares his fortune with Miss Jane Coombs, the “broad, heavy, rugged, middle-aged” gentlewoman of Aguilar.

I liked A Prairie Infanta for two things: the characterisation of Jane with her dignified demeanour and the town of Aguilar with its coalmines, adobe church, dirt streets and deep gorges, tall cottonwoods, mud-houses, goat-corrals, and Mexican children. The short novel is also a western story because it is set in a mining town many of whose inhabitants depend on prospecting to become wealthy. The mysterious Eva Wilder Brodhead, whose The Eternal Feminine is also set in Colorado, has written a good story really well.

Source for A Prairie Infanta: Project Gutenberg
Written by Prashant C. Trikannad at 03:55:00