This Tuesday, I’m going to tempt you into watching a black-and-white Laurel and Hardy classic as part of Overlooked/Forgotten Films and Television at Todd Mason’s blog Sweet Freedom. Don't forget to read the other fascinating reviews over there.


Oliver: Shot at sunrise!
Stanley: I hope it's cloudy tomorrow!
[After Stan and Ollie hear the verdict of their execution the next morning.] 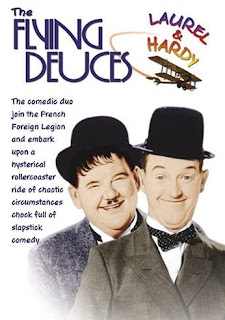 There are quite a few memorable scenes in The Flying Deuces (1939) starring the endearing pair of Stan Laurel and Oliver Hardy. The one I liked the most takes place towards the end when Stan and Ollie, who are enlisted in the Foreign Legion in France, sing Shine On, Harvest Moon and break into an impromptu tap-dance before the band and other uniformed members of the unit.

There is nothing unusual about this scene except that Stan and Ollie do the jig while they are on the run from their commandant (Charles Middleton) and his men: the comic duo is wanted for desertion!

The ludicrous scene lasts just over a minute, as Ollie croons Shine On, Harvest Moon in his distinctive voice, but it’s the cherry on the cake for me. Click on the link below and see for yourself.


The song itself is a popular duet first sung by the husband-wife team of Jack Norworth and Nora Bayes in the Ziegfeld Follies in 1908. It has since been performed by others in film and television, and on stage.

Stan and Oliver join the Foreign Legion in the hope that it will help Ollie forget Georgette (Jean Parker), the Parisian innkeeper’s daughter he is in love with.


When Georgette tells him that she already belongs to someone else, Ollie is heartbroken and leaves the inn with a self-portrait, a bouquet of flowers and a box of chocolates he had gifted the girl.

Back in their hotel room, Stan sits next to his friend and soothes him with tender words of encouragement (imagine that!) even as he pops a few more of the chocolates into his mouth and bumps into things around the room in his inimitable style. The seriousness of any situation is lost on Stan.

Stricken with grief, Ollie decides to commit suicide by drowning himself and he insists Stan come along with him—“After all that I have done for you!” Stan strongly feels otherwise. He whimpers in panic as the two of them prepare to jump into a shark-infested body of water with one end of the rope tied around their waists and the other to a stone. But then, an unexpected thing happens. Francois (Reginald Gardiner), a dashing officer in the Foreign Legion, is on patrol duty when he spots Stan and Laurel bungling their way through their imminent suicide. When he hears Ollie’s sad tale, he suggests they join the Legion as it would make him forget Georgette who, as you might have guessed, happens to be Francois’ wife. An elated Stan quickly unties the rope around his waist and drops the heavy stone into the water unmindful of the rope still around his friend—a predictable but funny moment, nonetheless.

Stan and Ollie join the Foreign Legion but trouble erupts when Ollie manages to forget his love and he and Stan decide to call it quits and walk out of the cantonment, as if they were walking out of a restaurant after a hearty meal. The last half-hour of the film is hilarious as the commandant and nearly every man in the unit look for the fleeing pair. They are to be caught and charged with desertion and might possibly have to face a firing squad. But, like I said, the gravity of the situation is lost on Ollie as much as it is on Stan.


There isn’t a Laurel and Hardy film that I haven’t enjoyed since childhood. The Flying Deuces, directed by Edward Sutherland, has all the comic stuff that L&H films are notoriously famous for even though the slapstick humour is along expected lines. Stan and Ollie generate ripples of laughter, unintentionally so, as they bungle their way in and out of situations of their own creation. The two comedians may lack the emotion and sentimentality of Charles Chaplin but they delight you with their shyness and innocence in everything that they do, no matter how adverse their circumstance. I love their way of life.