He rode a horse as black as night. He wore two guns tied low, the butts worn as smooth as the leather they nestled in. He was a tall, capable man heading into the Arizona badlands, moving towards trouble.

He was James Green: gunfighter, killer, and murderer — a man with the kind of reputation that made men flinch when his eyes met theirs, that stilled hands on their way to holstered Colts.

He was an outlaw, heading for a deadly double-agent's game in an outpost of hell itself!

In case you're figuring out who wrote those lines it was British writer Oliver Strange who, in my opinion, created one of the most memorable fictional characters of the Wild West—James Green alias Sudden, the Texas outlaw. I have read western fiction by numerous authors but nowhere have I come across a more romanticised western gunfighter than Strange’s quiet, brave hero. 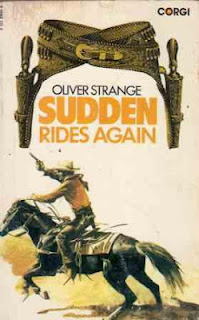 If I were to compare James Green to anyone, off the top of my head, it would be Flint (Louis L'Amour) and Shane (Jack Schaefer).

The above passage is the blurb on the back cover of the fifth book in the series Sudden Rides Again (1938) which begins thus, “It may be that I’m sending you to your death.”

What makes the novels of Oliver Strange so special is that the Englishman, apparently, never travelled to America and wrote about the daring exploits of Sudden from his imagination. As I said in an earlier post on Sudden, the author’s graphic description of the American landscape, its towns, its people, its cowboys, its ranches, and its gunfights is close to the real thing.

I remain fascinated by the Sudden series for another reason: the lingo, the slang, the colloquialism. I don’t know if English in the Wild West was spoken the way Strange tells it in his novels, but I have never come across anything quite like it in other western fiction.

“I said for yu to put yore paws up,” came a rough reminder.

“Shore yu did, but my hoss needs ’em—he ain’t no catamount,” the other retorted, as he picked a way down the decline. “Allasame, I’d as lief break my neck as be shot.” 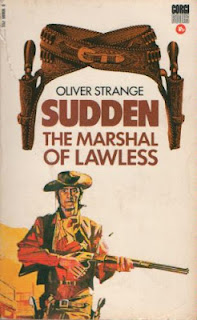 (Young Holt to Sudden) “Bin lookin’ for you all over,” he began. “They aim to git you to-night in there—a gunman named Butch has come a-purpose. Muley got drunk this arternoon an’ he’s bin tellin’ everybody to come to yore funeral.”

(Frosty to Sudden) Any idjut can look an’ laff,” he greeted. “Why don’t yu do somethin’, yu perishin’—ornament?”

“The Double K has dispensed with my services,” Sudden reminded. “Anybody out here with you?”

(Sudden to his black stallion) “Nigger, it’s goin’ to be dead easy—to break my fool neck.”

“Shore am, an’ sorry to be,” the puncher told him.

“It warn’t easy; the Colonel an’ Mart made me han’some offers, Jeff an’ Frosty damn near pulled guns on me, an’ Miss Joan cried, which was wuss’n all.”

“Somebody’s waitin’ for me in Tucson.”

Dealtry thought he understood. “An’ she’ll be anxious, huh?”

Sudden grinned, “Yo’re way off the trail, sheriff. The person waitin’ for me is a shortish, middle-aged fella, with grey hair an’ a persuasive manner. They call him ‘Bleke,’ an’ he can be—times.”

“Yeah, an’ he’ll be wonderin’ if he oughta send a wreath.”

“So you’re from him? You kept it mighty close.”

“I’m the third.” He told the fate of his predecessors. “I expect they talked too much.”

The sheriff breathed hard. “An’ we thought he was doin’ nothing,” he said. “I’ll bet he’ll be pleased with you.” 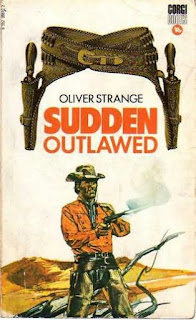 If you’re familiar with James Green alias Sudden then you’ll know that he isn’t responsible for any of the crimes pinned on him. Folks call him Sudden because he’s fast with his guns and there’s always a gunslinger waiting to prove he isn’t. He is Mr. Dependable who goes from one town to another, one ranch to another, and helps good people fight injustice and evil-doers. You'll enjoy his sardonic humour. Sudden, endowed with boyish good looks, is an honest man who plays straight with friend and foe. He is cool headed and has a unique ability of getting out of a blind alley. He rarely says who he really is. Folks usually discover he is Sudden when he is forced to draw, the bullet from one of his twin guns travelling faster than the eyes can blink. He is often sheriff and seldom mentions that he is also Deputy Marshal United States, a troubleshooter for Governor Bleke of Arizona.

Behind it all is his true mission: to get the two men who got the man who raised him...a promise he made to a dying man, a promise he keeps in The Range Robbers.

For the uninitiated, Oliver Strange wrote ten Sudden novels while English writer Frederick Nolan wrote five more books under the assumed name of Frederick H. Christian and did notable justice to Strange's writing style as well as to the legacy of the Texas outlaw.
Written by Prashant C. Trikannad at 02:48:00