These anthologies are my meagre contribution to Friday's Forgotten Books over at Patti Abbott's blog Pattinase.

"Mortal, mock not at the devil, life is short and soon will fail, and the 'fire everlasting' is no idle fairy-tale." — Heine (a reference to the 19th century German poet Heinrich Heine, I think.)

I haven't done a serious review of a forgotten book since Friday, August 10. I have been taking the easy way out by reading and writing about vintage comic-books, in the main the economy series by the Federal Reserve Bank of New York (August 23) and To The Last Man by Zane Grey (August 31) and, more recently, a historical work, The Story of the Outlaw, by western author Emerson Hough (September 3). Varied stuff, nonetheless.

This Friday is going to be no different because I still haven't read a forgotten novel. I just finished reading Gun Man by Loren D. Estleman, am nearing the end of Harry Potter and the Half-Blood Prince, have read the initial ten pages of Black Dice by Mack Bolan (Don Pendleton), and am tempted to pick up a Lawrence Block, either A Walk Among the Tombstones or Like A Lamb to Slaughter.

Mack Bolan and his allies, Able Team and Phoenix Force, can be considered as forgotten books except for one thing: people like me still read them. Together with Nick Carter, Ian Fleming, Carter Brown, and James Hadley Chase.

So then, this week I bring you previews of three anthologies I discovered at Project Gutenberg and ManyBooks, which have been kind enough to reserve a permanent seat for me over at their ebook libraries. The anthologies by various authors pertain to ghost stories and they are Best Ghost Stories (1919) with an introduction by Arthur B. Reeve, the American mystery writer; The Haunted Hour (1920), a collection of ghost poems compiled by Margaret Widdemer who doesn’t require an introduction; and Devil Stories (1921) edited by Maximilian J. Rudwin who, I think, is a German writer of fantasy and horror.

All three anthologies have contributions by some of the finest writers known to you and me. Here’s how each of the collections stack up…

Best Ghost Stories
Man is incurably fascinated by the mysterious. If all the ghost stories of the ages were blotted out, man would invent new ones.
— Arthur B. Reeve in his introduction 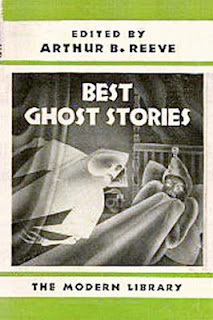 01. The Apparition of Mrs. Veal by Daniel Defoe
02, Canon Alberic's Scrap-Book by Montague Rhodes James
03. The Haunted and the Haunters by Edward Bulwer-Lytton
04. The Silent Woman by Leopold Kompert
05. Banshees
06. The Man Who Went Too Far by E.F. Benson
07. The Woman's Ghost Story by Algernon Blackwood
08. The Phantom Rickshaw by Rudyard Kipling
09. The Rival Ghosts by Brander Matthews
10. The Damned Thing by Ambrose Bierce
11. The Interval by Vincent O'sullivan
12. Dey Ain't No Ghosts by Ellis Parker
13. Some Real American Ghosts

The Haunted Hour
I have not considered as ghost-poems anything but poems which related to the return of spirits to earth.
— Margaret Widdemer in her preface 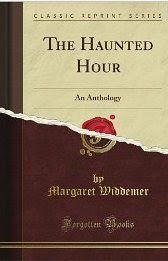 The Far Away Country by Nora Hopper Chesson

“All The Little Sighing Souls”
Mary Shepherdess by Marjorie L.C. Pickthall
The Little Ghost by Katherine Tynan
Two Brothers by Theodosia Garrison
The Little Dead Child by Josephine Daskam Bacon
The Child Alone by Rosamund Marriott Watson
The Child by Theodosia Garrison
Such are the Souls in Purgatory by Anna Hempstead Branch
The Open Door by Rosamund Marriott Watson
My Laddie's Hounds by Marguerite Elizabeth Easter
The Old House by Katherine Tynan

“Rank On Rank Of Ghostly Soldiers”
The Song of Soldiers by Walter De La Mare
The Blockhouse on the Hill by Helen Gray Cone
Night at by Don C. Seitz
The Riders by Katherine Tynan
The White Comrade by Robert Haven Schauffler
Ghosts of the by Grantland Rice
November Eleventh by Ruth Comfort Mitchell

“My Love That Was So True”
One Out-Of-Doors by Sarah Piatt
by Jean Ingelow
Betrayal by Aline Kilmer
The True Lover by A.E. Housman
Haunted by G.B. Stuart
The White Moth by Sir Arthur Quiller-Couch
The Ghost by Walter De La Mare
Luke Havergal by Edwin Robinson
The Highwayman by Alfred Noye Noyes
The Blue Closet by William Morris
The Ghost's Petition by Christina Rossetti
He and She by Sir Edwin Arnold

Shapes Of Doom
The Dead Coach by Katherine Tynan
Deid Folks' Ferry by Rosamund Marriott Watson
Keith of Ravelston by Sydney Dobell
The Fetch by Dora Sigerson Shorter
The Banshee by Dora Sigerson Shorter
The Seven Whistlers by Alice E. Gillington
The Victor by Theodosia Garrison
Mawgan of Melhuach by Robert Stephen Hawker
The Mother's Ghost by Henry Longfellow
The Dead Mother by Robert Buchanan

Legends And Ballads Of The Dead
The Folk of the Air by William Yeats
The Reconciliation by A. Margaret Ramsay
The Priest's Brother by Dora Sigerson Shorter
The Ballad of Judas by Iscariot Robert Buchanan
The Eve of by Walter Scott
Fair Margaret's Misfortunes, Anon.
Sweet William's Ghost, Anon.
Clerk Saunders, Anon.
The Wife of Usher's Well, Anon.
A Lyke-Wake Dirge, Anon.

Devil Stories
The reader will find between the covers of this book Devils fascinating and fearful, Devils powerful and picturesque, Devils serious and humorous, Devils pathetic and comic, Devils phantastic and satiric, Devils gruesome and grotesque. I have tried, though, to keep them all in good humour throughout the book, and can accordingly assure the reader that he need fear no harm from an intimate acquaintance with the diabolical company to which he is herewith introduced.
— Maximilian J. Rudwin in his introduction 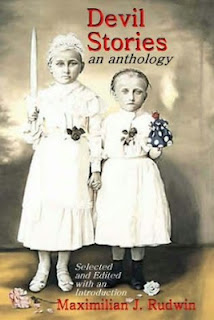 01. The Devil in a Nunnery: A Mediaeval Tale by Francis Oscar Mann
02. Belphagor, Or The Marriage of the Devil by Niccolò Machiavelli
03. The Devil and Tom Walker by
04. From the Memoirs of Satan by Wilhelm Hauff
05. St. John's Eve by Nikolái Vasilévich Gógol
06. The Devil's Wager by William Makepeace Thackeray
07. The Painter's Bargain by William Makepeace Thackeray
08. Bon-Bon by Edgar Allan Poe
09. The Printer's Devil, Anon.
10. The Devil's Mother-In-Law by Fernán Caballero
11. The Generous Gambler by Charles Pierre Baudelaire
12. The Three Low Masses: A Christmas Story by Alphonse Daudet
13. Devil-Puzzlers by Frederick Beecher Perkins
14. The Devil's Round: A Tale of Flemish Golf by Charles Deulin
15. The Legend of by Guy De Maupassant
16. The Demon Pope by Richard Garnett
17. Madam Lucifer by Richard Garnett
18. Lucifer by Anatole
19. The Devil by Maxím Gorky
20. The Devil and the Old Man by John Masefield

Since I haven’t reviewed the anthologies here, as I should have, the least I can do is provide you with the links to all three, at Manybooks, right here—Best Ghost Stories, The Haunted Hour and Devil Stories. You can download them in any format you like. Hurrah for Creative License!
Written by Prashant C. Trikannad at 11:42:00