When Robert E. Howard
got a rejection letter

While Farnsworth Wright was a veteran of World War I and a music critic for the Chicago Herald and Examiner, he was best-known as the firebrand editor of the pulp magazine Weird Tales, a man who often thrust rejection slips into the hands of famous writers and showed them the door.

Wright regularly published sf, fantasy and horror stories by Robert E. Howard, H.P. Lovecraft and Clark Ashton Smith in Weird Tales. However, he had a difficult relationship with the three authors, as this article tells you. It says, "Wright had a strained relationship with all three writers, rejecting major works by them, such as Lovecraft's At the Mountains of Madness and The Shadow Over Innsmouth, Howard's The Frost Giant's Daughter, and Smith's The Seven Geases (which Wright dismissed as just 'one geas after another')." He also published most of their stories that made them famous. 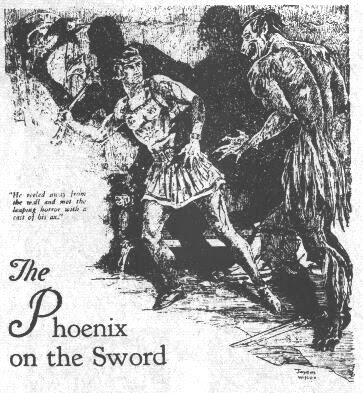 Here's what Farnsworth Wright thought of Robert E. Howard's story The Frost-Giant's Daughter (1932), an early short story about Conan the Cimmerian which, I believe, was not published in Howard's lifetime. It was published in The Coming of Conan in 1953, seventeen years after he passed away.