The Story of the Outlaw 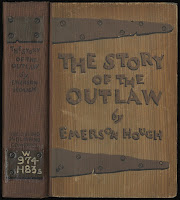 The Story of the Outlaw: A Study of the Western Desperado by Emerson Hough, writer of western stories and historical novels, should ideally be my entry for Friday's Forgotten Books over at Patti Abbott's blog. It isn't because I can't wait to feature it now, in slide-show format which tells its own story. It would take me at least a week, or more, to read the 232-page ebook from Project Gutenberg and probably as much time to write about it. A review of a western historical work requires some understanding of the period and the events around it as opposed to a review of a western novel. In spite of its historical backdrop, I'd be more comfortable writing about a novel I read.

The book offers "historical narratives of famous outlaws, the stories of noted border wars, vigilante movements and armed conflicts on the frontier." The copyright to this fascinating chroncile of the western outlaw, in his various avatars, is held by two entities, the Curtis Publishing Company, 1905, and Emerson Hough and the Outing Publishing Company, New York, 1907. I'm not sure what that means.

"The stories of modern train-robbing bandits and outlaw gangs are taken partly from personal narratives, partly from judicial records, and partly from works frequently more sensational than accurate, and requiring much sifting and verifying in detail. Naturally, very many volumes of Western history and adventure have been consulted," Emerson Hough writes in his preface to The Story of the Outlaw.

"Much of this labor has been one of love for the days and places concerned, which exist no longer as they once did. The total result, it is hoped, will aid in telling at least a portion of the story of the vivid and significant life of the West, and of that frontier whose van, if ever marked by human lawlessness, has, none the less, ever been led by the banner of human liberty," he adds.

The book is divided into following twenty-two chapters:

If you're an expert on Western history and frontier life, as Ron Scheer of California is, then you'll know what each of these chapters is about. Ron has covered Emerson Hough's work quite extensively at his blog Buddies in the Saddle. Here are the links to his posts on the American historian and his books, in order of publication:

Now then, the slide-show I promised earlier...

If you enjoyed the images, then you might also want to read the ebook at Project Gutenberg or ManyBooks. Click on the links.
Written by Prashant C. Trikannad at 04:22:00