Can comic-books be considered as books? Strictly no, unless they're like Stan Lee's The Mighty Marvel Superheroes’ Cookbook. A perfect recipe for Friday's Forgotten Books over at Patti Abbott's blog Pattinase which is being hosted by Todd Mason at his blog Sweet Freedom this week. Check out the two blogs for plenty of FFB action.

Now your kids can cook with the comics! 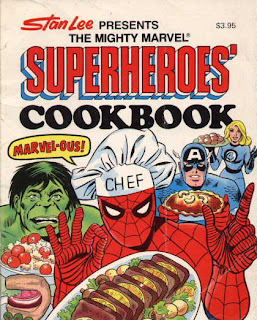 As a kid I used to wonder how Superman could drink water, sip wine or eat food when he was made of steel. I don’t think Jerry Siegel and Joe Shuster ever explained these life-sustaining aspects of their superhero’s life. As a teenager I wondered how the Man of Steel could make love to Lois Lane. Imagine the bionically-challenged Terminator taking a woman to bed…something like that. And as a grown-up I’m still wondering how he’s doing all of the above.

Come to think of it, in the comics Superman is rarely shown drinking or eating let alone making love though in the movie, Superman-II, he (Christopher Reeve) does sleep with his girlfriend (Margot Kidder) on a crystalline bed created out of kryptonite.

Turns out Superman isn’t the only superhero who drinks and eats and burps (let’s forget the sex for now).

A caboodle of Marvel superheroes not only wolf down large quantities of food, they even cook their own food, or so Stan Lee would like us to believe in The Mighty Marvel Superheroes’ Cookbook which is one of the most imaginative comic-book offshoots I have read—and own. Good thing I do: exaggerated as it sounds, used paperbacks of this book cost $124 (Rs.6,200) on Amazon USA and £109.90 (Rs.8,800) on Amazon UK.

A Fireside book published by Simon and Schuster, New York, in 1977, Superheroes’ Cookbook is a 95-page book of everyday recipes by some of Marvel’s leading heroes. Stan Lee claims it’s “the world’s first (and only) superhero cookbook.” It must be—I haven’t come across cookbooks of its kind over the past thirty-five years. At least, I don’t think DC came out with a rival cookbook by the Justice League of America. 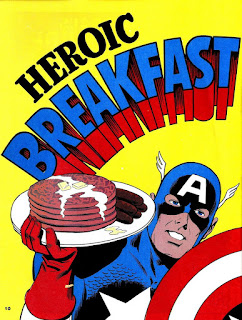 “Our recipes taste and smell Marvel-ous!” Head Chief Captain America proclaims as he takes you through what appears to be a normal cookbook with recipes for five-course meals, kitchen guide, do’s and don’ts, tips and all, except with one significant difference—you feel as if you’re reading a comic-book while browsing through the delectable recipes, which are accompanied by large colourful illustrations of the superheroes as they show off their favourite dishes.

So, for ‘Heroic Breakfast’ you can try out Captain America’s day starters comprising fruit juice pancakes and milk; cereal with milk; or fruit juice, eggs, bacon, toast and milk; or you can have the Hulk’s fried potatoes with bacon and eggs; or the Thing’s clobbered omelette. I can picture his brick-coloured fist pounding the eggs.

You can skip the breakfast and jump to the Fantastic Four’s superhero sandwiches and soups; the Sub-Mariner’s Submarine; The Human Torch’s Fireball; Spider-Man’s Parmigiani; or the Hulk’s Hulkburger. 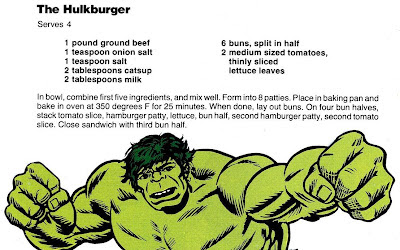 There are six exclusive Heroic Combos as well, if you like. 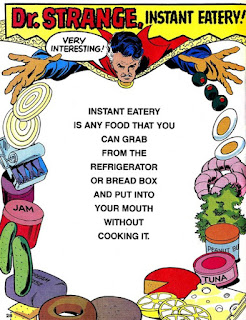 If these sound a tad boring or if you’re looking for something light on the tummy, then you can have some vegetables and salads in the Hulk’s kitchen where you'll find the Fantastic Four enticing you with Zangy Casseroles, Stuffed Peppers, Spinach and Corn Casserole, and Grilled Tomato with Cheese.

Pasta can hardly satiate the Hulk’s hunger and so the green goliath often has Spaghetti and Meat Balls in between clobbering General Thaddeus ‘Thunderbolt’ Ross’ armed lilliputs. He has a simple credo: “Hulk hungry—must feed face.” 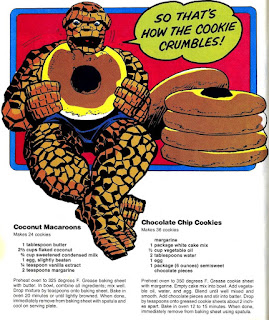 The Marvel gang takes the battle of the palate right to the end with recipes for delicious cakes and cookies, pies and tarts, and desserts and beverages.

The Mighty Marvel Superheroes’ Cookbook has great art and lettering by Joe Giella, a renowned American comic book artist who was on the staff of both DC Comics and Marvel. Presented by Stan Lee, the book is the brainchild of Gene Malis and the recipes are by Jody Cameron Malis of Celebrity Kitchen, Inc.

To round up here’s a tip from the superheroes’ kitchen guide: "Be Neat!! Don’t forget to clean up the mess in the kitchen! It’s easier to clean as you go along than to leave it for later." 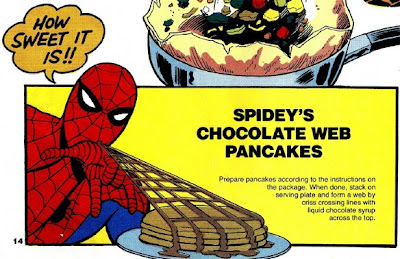