For this week’s Overlooked/Forgotten Films and Television over at Todd Mason’s blog Sweet Freedom, I’m going to let you have a peek into India’s 53-year old national television broadcaster and, as a bonus, one of its earliest English serials.

Television has been around in India since 1959 but the government-owned Doordarshan, or Far Sight, made real inroads into Indian households only in 1982, when DD, as it is known, changed from a transmitter-driven makeshift studio to a national broadcaster that took satellite television from the initial six or seven cities to the entire country.

It was also the year colour television came to India. However, most Indians couldn't afford TV let alone colour TV until mid-1980. Till then, people without their own television invaded the privacy of their neighbours who did, usually at dinner time, and sat huddled around their black-and-white TV sets to watch primetime shows between 8 and 10 pm.

The television set was usually encased in a dark, and sometimes printed, wooden cabinet with sliding doors and supported on four legs, each at a slight angle. It wasn't easy to watch television in those days for the screen would suddenly go all wonky. Thick black stripes zigzagged across it and the only way to straighten out the screen was by banging the side of the television set or switching the power on-off in rapid succession.

The prestigious shows included a popular word-building programme called What’s the Good Word? on Monday, a half-hour telecast of songs from Hindi films every Thursday night, and the weekly Hindi feature film on Sunday evenings. Everyone used to be so excited. Dinner could wait. Those who couldn't let it wait, ate and watched at the same time.


In the 70s and 80s, television in India brought disparate communities together and, no doubt, played a significant role in preserving communal harmony among its teeming millions.

Those were early days but Doordarshan was, surprisingly, swift-footed in bringing foreign television content to India. These were mainly low-budget programmes from Europe, particularly sitcoms from Britain and tele-matches (or tele-games) from Germany. American sitcoms came in much later, in early 1990, thanks to Rupert Murdoch’s Star TV (Satellite Television Asian Region). In many ways, it heralded the third invasion of India, after the Mughals and the British, not counting the trespass by the French and the Portuguese.

DD cast itself in no small glory by also broadcasting two German crime serials—The Old Fox and Derrick—produced by Transtel-Cologne and Telenova Film, respectively, and originally telecast on ZDF, the German television broadcaster. Both serials were created by Helmut Ringelmann, a German film and television producer. I have no idea who he is.

I have no recollection of Derrick but a little reading on the internet tells me that it was about a detective chief inspector and his loyal assistant inspector who solved murder cases in Munich and its surrounding areas.

The Old Fox, on the other hand, is as fresh in my mind as ever.

Known as Der Alte (‘The Old Man’) in German, The Old Fox is a crime drama that originally featured Siegfried Lowitz as Chief Inspector Erwin Köster and a handful of police detectives. Lowitz played the Old Fox from 1977 until 1985 after which the role was assumed by at least three German actors. I believe the serial continues on ZDF.

Herr Köster is a lot like Monsieur Poirot minus the handlebar moustache. They may not look alike, in spite of being short, portly and affable, but they think alike. They solve murder cases from within. As the Belgian detective is wont to say, “The true work, it is done from within. The little grey cells — remember always the little grey cells, mon ami.” It’s a sentiment the Old Fox shares for he, too, dives into the mind of his suspects and unearths the murky truth behind heinous crimes. 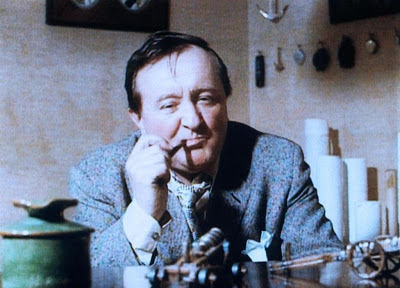 Old Fox is as “humble and unassuming in appearance” as he is crafty and diligent while investigating a case. He often surprises his loyal policemen by solving a mystery in the most unexpected manner; the look on their faces akin to the perplexed look on Captain Hastings’ face after his friend, Poirot, has poured fresh concrete into a case and sealed it.

Unlike Poirot, though, Koster often jumps into his car with his assistant inspectors and gives chase to possible criminals which, if my memory serve me right, often results in a brief gunfight. In that, the Old Fox braves more danger than the Belgian sleuth. But then, he is a homicide cop who often has to deal with the mafia and cannot afford Poirot’s luxurious pace of cracking cases.

The Old Fox is a gripping crime serial and one of the most realistic police dramas I have seen. Siegfried Lowitz as the soft-spoken Old Fox is superb. I don’t know if DVDs of the series are available but it would be worth your while to check it out. I’m sure you’ll enjoy watching Herr Koster go after the kriminelle.
Written by Prashant C. Trikannad at 05:00:00