The Murder on the Links (1923) by Agatha Christie

The hangover from last week’s Agatha Christie Week continues well into this one with a look at the mystery writer’s third novel for Friday’s Forgotten Books at Patti Abbott’s blog Pattinase.

‘Yes,’ said Poirot doubtfully. ‘No one who knew would bury a body there unless they wanted it to be discovered. And that is clearly absurd, is it not?’ 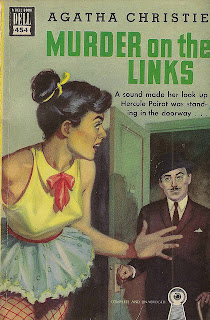 The Murder on the Links is considered to be one of the most gripping mysteries written by the Queen of Crime. Just when you thought you’d wrapped up the murder of wealthy businessman Paul Renauld and nailed the murderer, the Belgian detective works his “little grey cells, always the little grey cells” and produces a real humdinger—the history behind the mystery we’re reading and nothing is ever the same again. And all it takes Hercule Poirot is a little trip to Paris and Coventry.

Poirot and his friend, Captain Hastings, rush to France soon after receiving a distress letter from Monsieur Renauld who claims he is in imminent danger on account of a secret he possesses and requires the services of the veteran detective. Instead of greeting him in his study at Villa Genevieve, Merlinville, they greet his dead body lying face down in a grave on a golf course, a small paper knife sticking out of his back.

‘Mon ami, two people rarely see the same thing. You, for instance, saw a goddess. I—‘ He hesitated.

‘I saw only a girl with anxious eyes,’ said Poirot gravely. 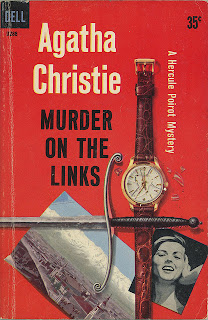 The suspects are many, from Renauld’s wife Eloise and son Jack, to housekeeper Francoise and maids Denie and Leonie, both sisters, to neighbours Madame Daubreuil and her daughter Marthe, to his secretary Gabriel Stonor and the gardener, Auguste.

The sleuths investigating the murder are equally so, from Monsieur Hautet, the examining magistrate, and Monsieur Lucien Bex, the commissary of police, to Monsieur Giraud from the Paris Surete, to Poirot and Hastings.

Giraud is a “famous” detective, albeit a cocky and arrogant one. His obvious hostility towards Poirot and a ridiculous desire to be one up over the Belgian sleuth causes him to jump the gun and arrest the wrong man. Not for long, though, as Poirot, the ever-seasoned private eye, is on hand to lay bare the shocking truth behind Renauld’s brutal murder—read mistress and blackmail—and the discovery of a second dead body that was never a part of the original crime.

Poirot’s brilliant deductions open a Pandora’s Box as Renauld’s past life that included murder, a conviction, evasion, tragic love, and a new life all come tumbling out of the closet. A murder that was remarkably similar to his own.

You can’t review Agatha Christie’s books without mentioning a few spoilers and that’s just not right considering that her mysteries are peppered with spoilers from page one.

I liked The Murder on the Links for the little gems that Christie’s novels are delightfully notorious for.

For instance, in this story Hastings actually falls in love with a mysterious woman known to him only as Cinderella, whom he meets right in the beginning, someone with a seemingly ulterior motive, one that you’d never guess till Poirot reveals "her" role in the Renauld mystery.

Interestingly, this is the only Christie book I've read where Poirot and Hastings fall out, in a gentlemanly sort of way, over the latter's desperate attempt to shield Cinderella from the probing mind of Poirot and possible suspicion and prosecution for the murder of Monsieur Renauld. To me, this was the surprise element of the mystery.

‘Because I love you, Cinderella.’

She bent her head down, as though ashamed, and muttered in a broken voice, ‘You can’t—you can’t—not if you knew—‘ And then, as though rallying herself, she faced me squarely, and asked, ‘What do you know then?’ 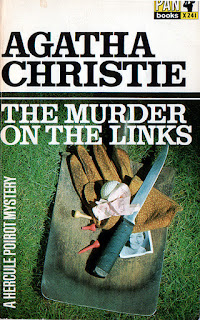 The other bit I liked about this novel is the humour. A lot of readers and reviewers of the Dame’s books usually focus on her mysteries and rarely on her funny bone, intelligent and original in its scope.

Here’s a delectable line: ‘Some of the greatest criminals I have known had the faces of angels,’ remarked Poirot cheerfully. ‘A malfunction of the grey cells may coincide quite easily with the face of a Madonna.’

Or the time when he needles Hastings for his roving eye: 'Yesterday it was Mademoiselle Daubreuil, today it is Mademoiselle—Cinderella! Decidedly you have the heart of a Turk, Hastings! You should establish a harem!'

Agatha Christie outshines herself with each successive novel. With The Murder on the Links she outperforms herself many times over. What amazes me about Christie’s writing is her train of thought, her power of deduction, her ability to mystify the reader with intrigues, the placing of clues that are so obvious as to miss them altogether, the subplots that are more fascinating than the main plot, and her mysterious characters, each with his or her own little secret, all leading up to a cracking mystery that leaves you satiated by the end.

Christie is a generous writer: she helps you along with the clues as you read but expects you to sniff them out on your own and lay them out in a logical sequence, just as Poirot expects of Hastings, 'You have a little idea, I see, mon ami! Capital. We progress.' 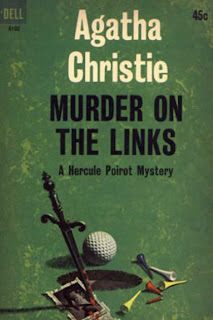 'Still, one must take crimes as one finds them, not as one would like them to be.'