If it’s Tuesday, it’s Overlooked/Forgotten Films and Television over at Todd Mason’s blog Sweet Freedom. Don't forget to check out the other fascinating reviews over there. 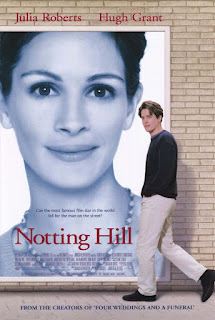 There’s something quite charming about movies where the hero and heroine, in typical Bollywood fashion, profess their love for each other in a public place and in broad daylight, usually towards the fag end of the film.

In Hindi films, for instance, it’s not uncommon to see the lovebirds—one of whom is always rich and the other always poor—declare their undying love (sic) for one another smack in the middle of a robust family reunion. Most Bollywood films end this way, on an unusually ecstatic note.

I can think of at least two English romantic comedies that have tried the formula with reasonable success—Notting Hill (1999) and Maid in Manhattan (2002). The difference is that Hollywood does it with finesse, though, in recent years Bollywood has been fine-tuning its final mushy scenes.

Anna Scott (Julia Roberts): Can I stay for a while?
William Thacker (Hugh Grant): You can stay forever. 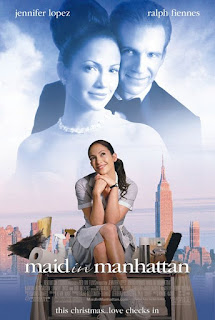 In Notting Hill, local bookstore owner William Thacker (Hugh Grant) is in love with the rich and beautiful movie star Anna Scott (Julia Roberts) but he can’t come to terms with her fame or accept her entreaties to love her because, “I live in Notting Hill. You live in Beverly Hills. Everyone in the world knows who you are; my mother has trouble remembering my name.”

After much soul-searching with his oddball friends, William realises he’s made a terrible mistake and, helped by his buddies, rushes off to the hotel where dream girl Anna is giving her last press conference before flying back to America.

William, who claims he represents Horse and Hound, edges his way past the paparazzi and shutterbugs and stands before Anna. Here’s what happens, courtesy IMDb. 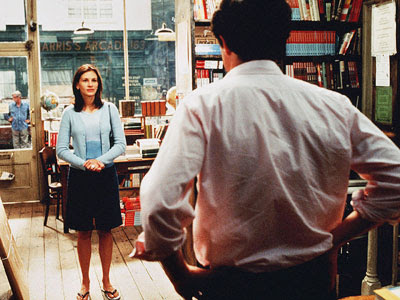 P.R. chief: Next question? Yes. You in the pink shirt (referring to William).
William: Uh, right. Miss Scott, are there any circumstances that you and he might be more than just friends.
Anna Scott: I hoped that there would be but I've been assured that there's not.
William: Yes, but what if...
P.R. Chief: I'm sorry. Just the one question.
Anna Scott: No. It's alright. You were saying?
William: I was just wondering what if this person...
Journalist: Thacker. His name is Thacker.
William: Right. Thanks. What if, uh, Mr. Thacker realised that he had been a daft prick and got down on his knees and begged you to reconsider if you would...indeed...reconsider.
Anna Scott: Yes. I believe I would.
William: That's wonderful news. The readers of Horse and Hound will be relieved.

Director Roger Michell not only gets William to reciprocate Anna's love for him, in public, he also does it with some fine humour. Imagine Horse and Hound!

Maid in Manhattan, directed by Wayne Wang, also ends with a press conference in a hotel foyer, where a young boy Ty Ventura (Tyler Posey) stands among journalists and asks the rich and famous Chris Marshall (Ralph Fiennes), who is standing for senate, why his mother and hotel maid Marisa Ventura (Jennifer Lopez) should not be given a second chance, the result of a misunderstanding between the much-in-love Chris and Marisa.

Jerry Siegel (Stanley Tucci), who manages the prospective senator’s public image, is aghast and quite helpless as Ty leads Chris through the hotel, past the kitchen staff, and to his mother’s room with the paparazzi and shutterbugs desperately in tow.

Chris: Can we start over? Second chance, second date? You as you, me as me. No secrets. What do you think?

The Bollywood formula of boy-meets-girl in public (or vice versa) and all’s well that ends and that kind of thing worked well in both these Hollywood rom-coms.
Written by Prashant C. Trikannad at 05:43:00