For this week’s Overlooked/Forgotten Films and Television over at Todd Mason’s blog Sweet Freedom, I have written about the "little-known" British sitcom 'Allo 'Allo! one of the funniest serials I saw in the 1990s. 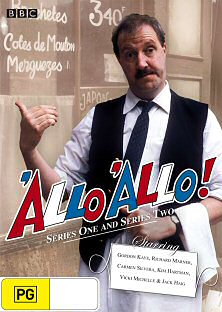 British sitcoms lack the finesse and the glamour that American serials usually have but they more than make up for it with an abundance of humour, especially dark comedy, and a caboodle of oddball characters and their eccentricities that are quite enjoyable.

’Allo ’Allo! created by producer David Croft and Jeremy Lloyd and broadcast on BBC One from 1982 through 1992 is one such sitcom that looks at the funny side of Nazi occupation of France through the eyes and ears of its rather bizarre characters, albeit with an unmistakeable undertone of reality that isn’t lost on viewers.

René François Artois (Gorden Kaye) is the squint-eyed owner of the town café who manages it with his wife Edith Melba Artois (Carmen Silvera), a cabaret performer, her mother Madame Fanny La Fan (Rose Hill) who lives out of an attic above the inn, and two young waitress, Yvette Carte-Blanche (Vicki Michelle) and Maria Recamier (Francesca Gonshaw), who are both in love with René. There are a few other interesting characters too.

In one of the serial’s many ludicrous moments, Edith often catches René in an awkward embrace with one or the other girl but forgives her husband as soon as he makes a farce of an apology.


That’s just a small aspect of the serial. Actually, the café, located in a small village, is the hub of secret activity on both sides of World War II, the Nazis and the French resistance, and its a glum-faced René’s job to pretend that he’s on both their sides; of course, they don’t know it, but the truth is that the inn-keeper is the reluctant hero of the French resistance. He even has a codename, Nighthawk.

The only way René can keep his head above water and his café running successfully is by ensuring that both the German officers and the French partisans are happy. It’s not an easy task as the Nazis and a ridiculous looking Gestapo chief on one hand and the French rebels and an Italian captain on the other troop in and out of the restaurant throughout the day. The German officers often catch René up to something but they quickly forget what he’s up to as René charms his way out of the situation.


Like I said earlier ’Allo ’Allo! is full of absurd moments. For instance, the German officers use the inn to hide stolen paintings, often from one another, while the French resistance uses it to hide RAF pilots shot down over France and plan their next move with René who, in reality, wants no part of it. The floorboard under ma-in-law’s bed up in the attic is where the resistance movement hides its radio and despatches secret messages.


’Allo ’Allo! is a parody of the German occupation of France and the French resistance to the Nazi invasion. In reality, René would have been terrified of both the Nazis and the Partisans and probably buckled under the pressure of staying true to either side. Yet, hundreds and thousands of ordinary citizens in German-occupied Europe must have done exactly what the innkeeper did, fought the invaders with a brave face, a smile on the lips, and some dark humour to boot.

I’m currently watching the reruns on BBC Entertainment and I’m enjoying the serial as much as I did the first time I saw it. Highly recommended.
Written by Prashant C. Trikannad at 11:05:00