It's not easy to read an entire book every week and review it every Friday but I try not to miss out on Friday's Forgotten Books at Patti Abbott's blog Pattinase. Here's my modest offering for the week that coincides with the release of Skyfall across India. People say it's the best Bond film ever but as someone on the train said, “How is that possible? Craig is so short, just two inches taller than me.”

“Robert Browning had the clap and he caught it from Charlotte and Emily Bronte.”
A second man, angry, bellowed, “Cutshaw, shut your mouth!”
“He caught it from both of them.”
“Shut up, you crazy bastard!”
“You don’t want to hear the truth.”
“Krebs, sound Assembly!” the angry man ordered.

Over the past fortnight, I couldn't finish even one of the three books I’m currently reading because of personal, albeit non-critical, issues. I'm thirty-eight pages into A Son of the Circus by John Irving, a little over half into the 146-page The Ninth Configuration by William Peter Blatty, the author of The Exorcist (1971), and I have just read the opening pages of a virtually unknown suspense novel I hope to review next Friday.

In a post on October 14 I’d mentioned that I would finish Blatty’s short fiction in another two days. Since then, however, I have managed to read only a dozen pages. That means, technically, I've no book to review for FFB this week. Of course, I could write about any one of the many novels I read over the past few months, or even years, but I'd have to scour the internet to refresh my wafer-thin memory. That's no fun. So what I'm going to try and do is give you a partial review of Blatty’s psychological thriller mixed with a strong dose of philosophy. I know that’s not much fun either but at least it’s something.

The Ninth Configuration, originally written by Blatty as Twinkle, Twinkle, “Killer” Kane! in 1966, is the outrageous story of twenty-seven decorated military officers who are interned by the Pentagon in a secret installation, “a grotesque rotting mansion,” in the remote forests of the Pacific Northwest. All the men are seemingly crazy for no apparent reason and when they talk sense and nonsense at the same time, you can’t help wonder if they really are mad or if they are only pretending.

In walks Colonel Hudson Stephen Kane, a brilliant Marine Corps psychiatrist, who is assigned by the Pentagon to treat the patients at Center Eighteen. Kane is cool as a cucumber as some of the inmates—the lead characters in the story and particularly the highly animated former astronaut Captain Billy Thomas Cutshaw—unleash their verbal missiles at the new commanding officer in his office and in his quarters. He refuses to keep the doors locked because “ They've got to be able to see me whenever they need to.” 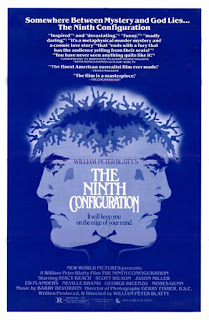 Kane studies their case files and listens attentively to their crazy voices, each increasingly making less sense than the next, and you don’t know who is humouring whom.

Here are some instances…

When Colonel Richard Fell, the medic, walks into the office without wearing his trousers, Kane asks him, “Do you plan to get dressed?” To which Fell replies, “How the hell can I get dressed when Lieutenant Fromme won’t surrender my pants? You don’t want me to rip them off!”

Or when Kane asks Cutshaw why he aborted his moon mission, the ex-astronaut answers: “Why should I? What the hell’s up there? When Christopher Columbus sailed from Spain, did he ever dream that he’d find America? All he ever dreamed about was compasses. Idiot starts out looking for India and then plants the flag on Pismo Beach.”

Lieutenant David Reno is adapting Shakespeare’s plays for dogs including his own, called Irresponsible, which bolts into Kane’s room and starts licking his shoe. When Kane asks Reno if it’s his dog, the latter shouts back, “Does he look like my zebra? Christ, what the hell’s wrong with you people?” He looks at the dog and says, “He’s ten minutes late for rehearsal. Now out!”

When Kane asks another inmate, Price, why he wants his flying belt back, Price says with acid hostility, “I want to play Tinker Bell in drag in a fungoid production of Peter Pan, All right? Are you happy? Now, where the hell is it?”

Blatty tells us that the forerunner to these delusional military personnel and their delusional rants is Nammack, a captain in the USAF, who, while piloting a B-52 on a bombing run over Hanoi, abruptly stands up in the cockpit and claims he is superman with superhuman powers. Nammack cannot be cured without Kryptonite, it would seem, and he is soon followed by scores of officers who manifest sudden mental disturbance even though none of them has a history of mental or emotional imbalance.

If the inmates of Center Eighteen are absolutely crazy, as you are given to understand, their commanding officer is not above suspicion either. In fact, there’s something decidedly fishy, and chilling, about Colonel Kane: it involves a recurring nightmare about his past, something that happened in Vietnam, possibly a nervous breakdown he suffered during the war, and involving a person by the name of Killer Kane.

Cutshaw may be a loony himself but he is convinced that Kane is more crazy than he is. 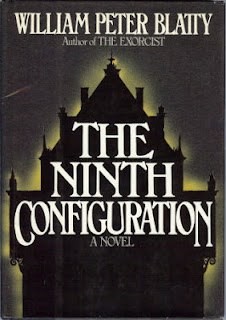 The Ninth Configuration, which received critical acclaim, starts out as a farcical comedy but the plot soon gathers a serious tone as Kane’s past catches up with him. I have enjoyed the book so far because of the strong element of humour, however whacky, not to mention the philosophical debate that Kane has with Cutshaw over the idea of God and the divine plan. It’s a well-written novel and the initial dialogues between Kane and the “mad” officers will make you laugh as you visualise the absurdity of the comic situations.

I’m hoping to read the rest of the book this weekend and find out why the twenty-seven men are behaving like lunatics or what secret Kane has up his sleeve. I’m keeping my fingers crossed, though. Now, did I say a partial review!

Incidentally, William Peter Blatty wrote, directed and produced the film The Ninth Configuration in 1980 where Stacy Keach (known for his Mike Hammer roles) is Colonel Kane and Scott Wilson (of In the Heat of the Night and In Cold Blood fame) plays Capt. Billy Cutshaw. I haven’t seen the film but my natural choice for Cutshaw’s role would have been John Cassavetes or Telly Savalas. Get the picture?
Written by Prashant C. Trikannad at 00:19:00