Price Regan stood alone, as terribly alone as a man could be, but that was the cost of being a lawman.


The story of The Lone Deputy by the late American western author Wayne D. Overholser reminded me of the stories I used to read in pocket-sized cowboy comics, known as Cowboy Western Comics or Western Picture Library. I still have a few of the latter, with colour art work on the covers and black-and-white illustrations inside.

Typically, you have Marshal Price Regan maintaining law and order in a small town called Saddle Rock, Colorado, and doing a good job of it too. His problems, however, don’t lie within the town, which is eyeing its own county, as much as they do with the three neighbouring ranches—Rocking C owned by Cole Weston, Broken Ring belonging to the Mohawk brothers, and Bridlebit run by family man Red Sanders. Their spreads are located on either side of the Yellow Cat Creek which empties into Elk River.

The biggest spread of them all is Weston’s Rocking C that stretches for miles to the south, on the other side of the river. Being the first cattleman to occupy the vast land near Saddle Rock, Weston also behaves like he is the law of the land.

The three ranch owners, in cahoots with politically inclined banker Barry Madden, are bent on running poverty-stricken settlers out of Yellow Cat, particularly the very crooked and ugly faced Walt Cronin who is accused of stealing their cattle. Cronin manages a store and saloon that caters to the harmless settlers who are mostly into farming. 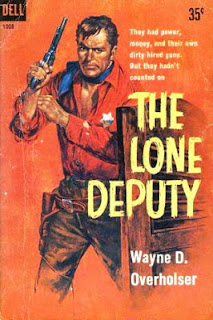 Weston, who has gunslingers protecting his back round the clock, is the de facto ring leader and the most evil of the lot, though the Mohawk brothers, Tom and Joe, offer him stiff competition. Weston and Madden “order” Regan to get rid of Cronin and the other nesters and rustlers failing which they would settle the matter their way. And they do just that, as Regan refuses to do their bidding until he has strong evidence against Cronin and the others.

The Lone Deputy is the frontier story of a lone man who must fight a lone battle against the wealthy and powerful ranchers. All Price Regan has on his side are his badge and his gun, his conscience, an indomitable spirit, and his girl Laura Madden. Perhaps, they are more than enough for the brave marshal of Saddle Rock.

“With no more backup than his shadow, Regan would fight for what he knew was right—even if it meant gunning down every last one of Weston’s hired killers.” 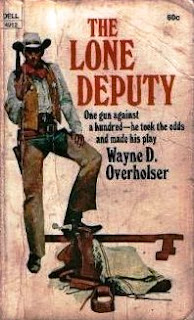 Wayne D. Overholser (1906-1996), author of more than seventy western novels and winner of the Spur Award as well as the Western Writers of America Lifetime Achievement Award, has written a classic western adventure. The 189-page western novel is a pleasant read, on account of the author’s simple narrative style and a credible story that gives you both sides of frontier justice.
Written by Prashant C. Trikannad at 09:21:00