Journey Toward Death (1983) by Amos Aricha

My contribution to Patti Abbott’s Friday’s Forgotten Books over at her blog Pattinase is a suspense novel about the making of the Israeli mafia in America written by a noted Israeli writer.

Mossad’s Nimrod. Tough, brilliant, he is the arrowhead of this treacherous mission, a man marked for death... 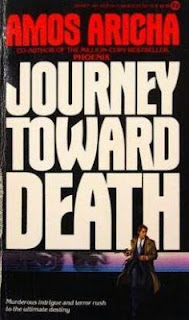 Nimrod Eden is a former commando in the Israeli Defence Forces, who fought during the Yom Kippur War, and is now a freelance agent for Mossad, the Israeli intelligence service, in New York. Nimrod listens to western classical music on his Walkman, while running long distance every morning. He speaks fluent English, seldom carries a gun, and moves around with an attaché case with a tape recorder inside. He seldom records the conversations of sources and suspects without letting them know. Nimrod is soft spoken, often sentimental, and experiences fear like everyone else. He has a habit of patting down his mop of hair and usually has a hint of a smile at the corners of his mouth.

A lieutenant-colonel in the intelligence wing, Nimrod may not seem like the battle-hardened Mossad agent you hear about in spy fiction. But he is every inch the tough and intelligent secret operative you read about in espionage thrillers.

In Journey Toward Death, by Israeli writer and painter Amos Aricha, the secret agent from Manhattan is called upon to investigate the mysterious liaison between an Israeli immigrant David Biton and Arab and North African delegations to the UN, ranging from Egyptians, Iranians, Syrians, Lebanese, Iraqis, Tunisians, and Moroccans.

Mickey Katz, the security chief for the Israeli delegation to the UN, deems it a high-risk security issue and pulls out all stops to get to the bottom of it. He sends in Nimrod whose investigations take him from New York to Los Angeles where he uncovers a sinister trail of conspiracy at the heart of which lies a brutal war for control of the drug market of the entire west coast.

Nimrod soon finds out that Biton’s secret meetings with the UN delegates are linked with his desperate bid to become the new drug kingpin in California. He was earlier the uncrowned king of the Israeli mafia, the Beit Dagan and Bat Yam gangs, and later mastermind of the drug racket in Europe before the powerful West German dealers and the Chinese mob forced him to immigrate to America where he tries to establish a new drug mafia.

His investigations take Nimrod all over Los Angeles, particularly to the Israeli pockets in downtown Hollywood, in the Valley, on Pico Boulevard, and businesses on Fairfax—all Biton’s territory—and right in the midst of a bloody war between Biton and his men and the established mafia families of the west coast, in particular a man called Mike Billeti who controls it all.

Nimrod Eden must get to the bottom of the conspiracy before Biton or Billeti (you don't know who) finally succeeds in their attempts to eliminate him.

This is the first time I have read about Israeli immigrants and the Israeli mafia in America, one of the main reasons why I enjoyed the novel. The other is the presence of the Sakhara, an old woman who claims to have psychic powers and travels all the way from Beit Dagan, Israel, to Los Angeles with her niece, the beautiful Dalith, to prove that Biton, the youngest of her four sons, is not a murderer.

Journey Toward Death moves at a slow pace with very little action in the initial two hundred pages. Aricha’s prose is simple and engaging. The plot is uncomplicated and the narrative weaves in and out of the lives of various Israelis, friends and foes alike, as Nimrod Eden tries to unravel the truth. I picked up the novel because I’d never heard of Amos Aricha before and also because the blurb on the back cover promised high suspense. It lived up to my expectations. 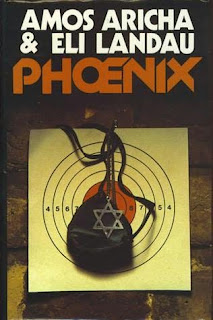 Amos Aricha is a well-known painter, author and playwright from Israel. His other novels include Hour of the Clown, The Flying Camel, Spymaster, Phoenix and Fenice, the last two he co-authored with Eli Landau. Phoenix is apparently his most famous book.