My maiden read and review of a John D. MacDonald thriller goes towards Friday's Forgotten Books over at Patti Abbott's blog Pattinase which is being hosted by Todd Mason at his blog Sweet Freedom this week. Check out the two blogs for plenty of other great reviews.

What do you do when an insane criminal threatens to destroy your family and the police are powerless to protect you?

There is a scene in Friends where Chandler (Matthew Perry) is upset because he sees a video of Richard (Tom Selleck) having sex with a woman he mistakes for his girlfriend Monica (Courteney Cox). When he mentions the video to Monica and insists that Richard is holding on to it because he hasn't got over her, she runs the tape and finds that it isn't her at all. Chandler is ecstatic and blurts out, “Life is good again!”

It’s the sort of positive sentiment most people express, or say to themselves, after they are out of a particularly difficult period, especially where families are involved. It feels no less than a rebirth.

Just as it does for Sam and Carol Bowden after they almost single-handedly confront the psychopathic killer who has been terrorising them and their three children, two boys and a teenage girl, for several weeks.

John D. MacDonald deserves sincere praise for writing a gripping tale as well as a gentle rap on the knuckle for putting you through 160-pages of edge-of-the-seat suspense. You want to sit through Sam and Carol’s nightmare and see what happens and you also want to walk away from the terror unfolding in their picture-perfect family life. The temptation to sit through it is greater. Morbid curiosity, perhaps. 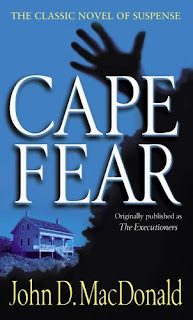 In Cape Fear (previously The Executioners), MacDonald does not waste time in yanking the reader straightaway into the heart of his story, into the lives of three people—Sam and Carol, an intelligent and handsome couple deeply in love, and Max Cady, a mad criminal seeking to destroy everything they cherish.

Many years ago, Lieutenant Sam Bowden, an air force pilot, was responsible for putting Cady in prison for the rape of a teenager, and now he is out, stalking the successful lawyer and his family with cold-blooded intent. He poisons their dog and nearly shoots to death the older son while at camp. The police are not especially cooperative. So Sam and Carol hit upon a plan that’s as daring as it’s stupid: use Carol as bait to trap the animal. But, what else can they do?

In Cape Fear, MacDonald has created a family that is as perfect as you would expect families to be—happy and vulnerable and fiercely protective of their small, cocooned world. And then, suddenly, he puts a crack in the mirror that widens and threatens to shatter into a thousand small pieces. Sam and Carol go nearly to pieces, themselves, to ensure their mirror is intact. 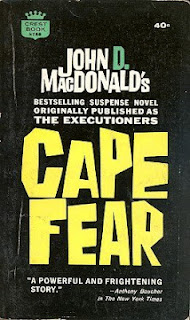 The other notable aspect of this blinder of a novel is the character and role of Max Cady. The author has portrayed a terrifying picture of a villain who remains largely in the shadow of the Bowdens, exposing himself neither too much nor too little. But you know he’s around somewhere, waiting, lurking, haunting, and you can’t help thinking to yourself, “Come on, Cady, do what you have to do and get it over with.” And while you wait for the cad to do something, you’re not thinking of Sam, he can take care of himself; you’re thinking of Carol and her children, especially their innocent and lovely teenage daughter. You’re thinking of your own family and their vulnerability. Damn you, MacDonald!

In the end, though, "Life is good again!" is what Sam Bowden is thinking as he tells Carol, "It's like recovering from a serious illness. All the world looks fresh and new. Everything looks special. I feel enormously alive. And I don't want that to fade. I want to hang on to that." How often have we felt that way?

And that, in essence, is the narrative power of John D. MacDonald.

Cape Fear  is my first book by the legendary American crime and suspense writer and I'm looking forward to reading some of his other novels in my possession, including a couple of Travis McGee paperbacks.

Note: I have deliberately left out mention of the two film adaptations of Cape Fear (1962 & 1991) because I haven't seen either. I’d, however, like to guide you to a past review of the book by Patti Abbott over at her blog Pattinase.
Written by Prashant C. Trikannad at 13:17:00