This delightful film is my contribution to Tuesday’s Overlooked/Forgotten films and television meme over at Todd Mason’s blog Sweet Freedom. Don't forget to check out the other fascinating entries over there. 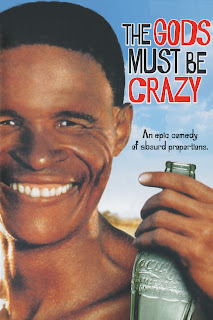 Narrator: They must be the most contented people in the world. They have no crime, no punishment, no violence, no laws, no police, judges, rulers or bosses. They believe that the gods put only good and useful things on the earth for them to use.

The Bushmen of the Kalahari Desert in southern Africa are the most contented people in the world, at least in the movie, till one hot savannah afternoon a Coke bottle carelessly tossed out of a passing airplane falls in the peaceful village of the San tribe with a gentle thud. Nothing is the same thereafter.

The villagers, especially the little children, begin to fight over the strange object — their first exposure to a world outside of their own primitive existence — to the extent that it proves injurious to their health, as one kid conks another kid on the head with the glass bottle. Ouch, that hurt!

Peace is shattered, egos clash, tempers flare, and fights break out as nearly every curious villager claims the bottle as his or her own. The innocent tribe has never seen disharmony among their people. Xi, a wise young Bushman played by Namibian San farmer N!xau, sees it too and realises what is happening. He confers with the village elders and decides to return the offending object to the gods — who must have sent it to spread discord among his people. 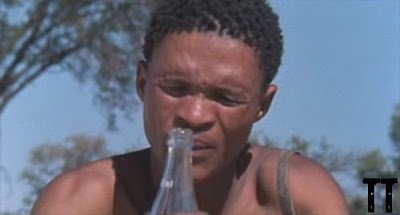 Narrator: The one characteristic which really makes the Bushmen different from all the other races on earth is that they have no sense of ownership at all. Where they live, there's really nothing you CAN own: only trees and grass and animals. In fact, these Bushmen have never seen a stone or a rock in their lives. The hardest things they know are wood and bone. They live in a gentle world, where nothing is as hard as rock, steel or concrete.

The gods must be crazy or else why would they rain down glass bottles instead of stuff the Bushmen can use, share among themselves, and live in peace like before. Xi has no answers but he is determined to return the bottle to its divine owner. So, the next morning he sets out with the bottle in one hand and his bow and quiver in the other, but not before consoling his weeping son who doesn't want him to go, or probably doesn't want to see the mysterious object taken away. 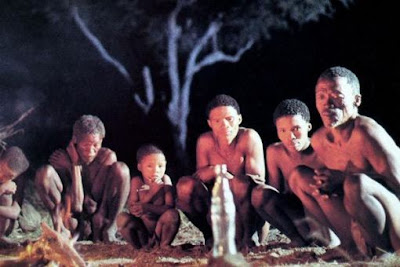 Narrator: One day, something fell from the sky. Xi had never seen anything like this in his life. It looked like water, but it was harder than anything else in the world. He wondered why the gods had sent this thing down to the earth… It was the strangest and most beautiful thing they had ever seen, and they wondered why the gods had sent it. Pabo (a small boy) got his finger stuck in the thing, and the children thought he was very funny.

The Gods Must Be Crazy, directed by South African director Jamie Uys who gave us the documentary, Beautiful People, ranks in my list of funniest movies ever. The film is peppered with slapstick humour from the time the Coke bottle lands in the unsuspecting village till Xi finally manages to fling it over a cliff — his version of the edge of the world — and returns to his village.

Although the film revolves around Xi and his quest, it has at least two other sub-plots in the form of Andrew Steyn (Marius Weyers), a bumbling but well-meaning biologist who does a soft “yay, yay, yay, yay, yay, yay…” every time he fumbles and stumbles in the presence of Kate Thompson (Sandra Prinsloo), a school teacher who has newly arrived in the area, and a band of guerrillas straight out of a comic strip. On his way to the edge of the world, Xi crosses paths with Steyn and his assistant M'pudi (Michael Thys), an old and grizzled mechanic, and helps them rescue Thompson and her pupils from the clutches of the  guerrillas led by fat slob Sam Boga (Louw Verwey).

Released in 1980, The Gods Must Be Crazy has many comic moments…

Like the time when Xi picks up the bottle and flings it high into the air, pleading with the gods to take it back, but the bottle falls right back down and the Bushman takes evasive action just in time.

Or when Xi meets Steyn and M’pudi for the first time and insists they take back their bottle because it has caused enough strife in his village.

M'pudi: He talks about an evil thing (the evil thing being the Coke bottle).

Narrator: The hairy one (M'pudi) said, “We don't want the thing. You have to throw it away yourself.” Xi was very disappointed. He thought it was unfair of the gods to make him throw the thing off the Earth. In fact, he began to doubt if they really were gods.

Or, when Steyn, stranded in the forest with Thompson one night, runs for cover as a rhino, as is its wont, suddenly looms out of nowhere and stamps out the fire. Steyn, his pants down at the moment, makes a mad dash only to collide into Thompson who suspects the poor man of an ulterior motive. 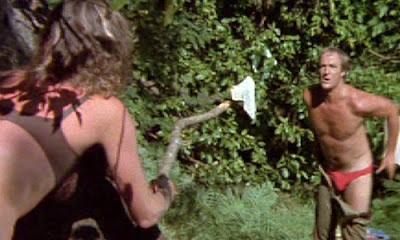 Narrator: The rhino is the self appointed fire prevention officer. When he sees a fire, he rushes in and stamps it out.

Or when Xi tries to drive Steyn’s jeep standing on the bonnet of the vehicle, his back to the road, so to say, as the clumsy biologist chases it, hops in, and brings it to a halt.

M'pudi: I'm teaching him how to drive, just for the hell of it. There's nothing else to do around here.

Or the time when Xi innocently picks up a rifle and points it at its real owner, a tribesman he meets on his way, and the latter runs for his life, prompting our Bushman to jump in the air and run for his own life as well. Xi runs for a while, stops, turns around, and wonders what scared the fellow off!

Or when Steyn roars past in his jeep and Xi sits bolt upright and looks around frantically.

Narrator: One day, a very noisy animal rushed past where Xi was sleeping. It left very peculiar tracks, as if two enormous snakes had slithered past.

Or when the driver of the jeep carrying the guerrilla chief and his men brakes suddenly and one of the insurgents riding in the back is thrown clear from the vehicle.

Nearly every scene in The Gods Must Be Crazy is funny and evokes instant laughter and where it doesn’t, Xi livens it up with his innocent smile and candour. He is a cute little fellow whose life has turned upside-down because of modern man’s disregard for him and his people and their way of life — simple yet fulfilling. The clash of civilisations is obvious: Xi wants his happy little world to be left alone and he wants no part of yours — you can keep it as long as you dump your Coke bottles elsewhere. 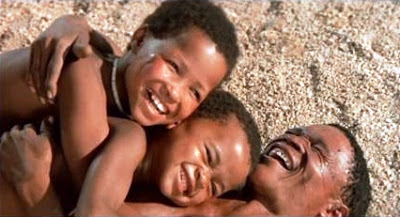 Note: The quotes from the film have been sourced from IMDb.
Written by Prashant C. Trikannad at 11:43:00