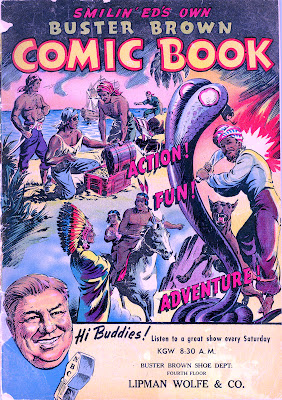 One of the amazing things about copyright-free material on the internet, or material available under Creative Commons License to put it correctly, is what you stumble upon — the surprise factor. For instance, browsing through Internet Archive I came across an early 20th century comic-book series I’d neither heard of nor read before —  Smilin’ Ed’s Buster Brown Comics.

Tracing its origins on the internet, I found that Buster Brown was originally a comic strip character created in 1902 by renowned cartoonist Richard Felton Outcault, who was associated with the famous Brown Shoe Company. The comic strips revolved around Buster Brown, an impish young boy, his sister Mary Jane, and his American Pit Bull Terrier, Tige, a talking dog.

Later, Smilin’ Ed McConnell, the well-known host of the children's radio and television series, Smilin' Ed's Gang, and Buster Brown came together to launch Smilin' Ed's Buster Brown Gang on the airwaves. By then, the comic strip had faded from public memory and it wasn’t long before the character “was merely the trademark symbol for a shoe company.”

Incidentally, the Brown Shoe Company came into the picture much later though people associated its Brown Shoe with the Buster Brown character. The shoe company offered in-store Buster Brown comics that were written by Hobart Donavan, who wrote all the three stories in the comic-book featured here.

I might be sketchy with the history behind Buster Brown, the comic strip and the radio show, and so I invite readers with better knowledge to fill in the gaping blanks.

The three Smilin’ Ed’s Buster Brown Comics turned out to be a delightful set of stories with colour illustrations that resemble some of the early comic-books, notably Classics Illustrated. All the stories revolve around young lads who go on adventures to prove to their fathers and mentors that they are more men than boys, that they have grown up, and that they can stand shoulder to shoulder alongside adults. 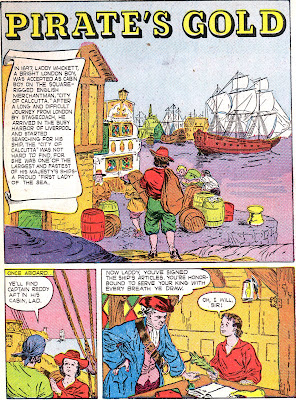 The first story in the comic titled Pirate’s Gold is set in 1697 and is about Laddy Whickett, a small boy from London, who gets a job as a cabin boy on His Majesty’s Ship City of Calcutta. On board the ship, Captain Reddy (judging by the name, he would be an Indian from the southern state of Andhra Pradesh) places Laddy under the charge of his first mate Jamie Fitzroy. As the story unfolds, Laddy helps Fitzroy recapture the ship from pirates disguised as crewmen on the ship. His Majesty’s Navy rewards Laddy for "his courage, his wit and his nerve" by appointing him as midshipman in the navy. 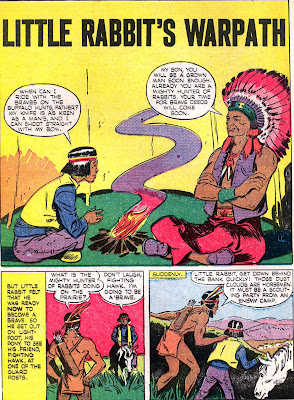 The second story, Little Rabbit’s Warpath, is about Little Rabbit, the son of a Sioux chief, who warns his village about an impending attack by the apaches that enables his father to launch a surprise assault on the enemy and defeat them. As a reward, he is given a new title — Little Fox. No more hunting rabbits for the little lad. In this story, too, Little Rabbit is mentored by Fighting Hawk, a young brave warrior from his village. 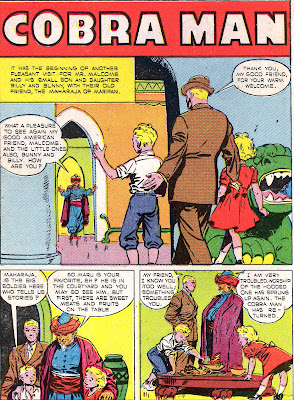 In the third story, titled Cobra Man, Billy and Bunny, the young son and daughter of an American gentleman, help their father’s old friend, the Maharaja of Maripan, expose a plot by the cobra gang, led by the king’s stepbrother, to take over the kingdom. As in the previous stories, Billy and Bunny find a loyal friend in Maru, a big soldier and the king’s trusted lieutenant.

All in all, an entertaining comic-book.