'They drew First Blood, not me.' 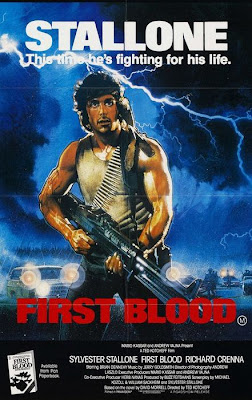 First Blood is my contribution to Tuesday’s Overlooked/Forgotten films and television meme over at Todd Mason’s blog Sweet Freedom. Don't forget to check out the other entries there.


“You don't seem to want to accept the fact you're dealing with an expert in guerrilla warfare, with a man who's the best, with guns, with knives, with his bare hands. A man who's been trained to ignore pain, ignore weather, to live off the land, to eat things that would make a billy goat puke. In Vietnam, his job was to dispose of enemy personnel. To kill! Period! Win by attrition. Well, Rambo was the best.”
— Colonel Trautman (Richard Crenna) in First Blood (1982)

Pride before fall. Sheriff Will Teasle (Brian Dennehy) learns the hard way as he and his pride fall right through the skylight of his deserted police station and land at John Rambo's feet.

If only Teasle had listened to Rambo (Sylvester Stallone) early in the 93-minute run First Blood, he could have easily salvaged some of his pride and saved his small town from arson and destruction.

The sheriff doesn't — not when one of his men and two dogs are killed and five others are injured or even when the Vietnam hero ambushes him with his deadly knife. Rambo, his face grim and grimy, warns, "I could have killed 'em all, I could kill you. In town you're the law, out here it's me. Don't push it. Don't push it or I'll give you a war you won't believe. Let it go. Let it go..." (For Rambo, that was a mouthful, I thought.)

But Teasle doesn't let go. He is a stubborn fellow. The State Patrol and the National Guard are finally summoned to ferret out Rambo from the woods.


If only the sheriff had left Rambo alone from the beginning. But Teasle who doesn't like "drifters" in his peaceful town drives him to the outskirts of the town where he shows him the way to Portland so he can go and have a bite to eat.

Rambo is equally stubborn. He might have lost it in Vietnam but he knows his rights, at least the right to meet an old friend or have a bite in the town whose sheriff has just expelled him. He walks back but not for long. Teasle, who sees him walking back in his rear-view mirror, swerves his patrol car around sharply and brings Rambo in.

If only Teasle had ignored the Green Beret's return and not taken him to his police station where his men, particularly nasty cop Deputy Sergeant Arthur Gault (Jack Starrett), taunt him and beat him till he likens his treatment to torture he braved in Vietnam, loses it, and beats the crap out of the cops before fleeing on a bike.

The sheriff follows Rambo in dogged pursuit, all the way to the woods, but this time he calls for backup that comprises six men, two dogs and a chopper with trigger-happy Sergeant Gault in it. Together, the hunting party enters the woods but all the men, except for Teasle, fall prey to party-pooper Rambo's guerrilla tactics. Gault falls out of the chopper which serves him right for taking potshots at an unarmed civilian trying to climb down the sheer face of a cliff with bare hands. (You feel giddy looking down from where Rambo is hanging.)

Teasle and his men are trained in boy scouts, not guerrilla warfare. He and his men report to the sick bay at base camp where they have a surprise visitor. "Who the hell are you?" the sheriff barks as Colonel Trautman (Richard Crenna) approaches his tent.


"I came to get my boy...," the colonel replies. "I recruited him. I trained him. I commanded him for three years in Vietnam. I'd say that makes him mine."

If only Teasle had backed down after Rambo's former boss tells him wryly, "I don't think you understand. I didn't come to rescue Rambo from you. I came here to rescue you from him."

But the sheriff is a stubborn fellow. He goes after Rambo with a 200-strong posse and Colonel Trautman's parting words, advising him to take "a good supply of body bags" with him, ringing in his ears. (Poor Teasle, he's done for.)

I liked First Blood, directed by Ted Kotcheff, the first time I watched it soon after it was released in 1982. I liked it again when I saw it for the umpteenth time yesterday.

John Rambo — Vietnam vet, Green Beret and Congressional Medal of Honour — is all very impressive but for me the movie is not so much about one man's war against a small town's police force as it is about one man's acting that stands out above all — Brian Dennehy.

Since I have never been to America, I don't know what real small-town sheriffs are like. I have only read about them in books and seen them in films. But if I were to make a guess, I think they might be a bit like Sheriff Teasle — proud, fearless, loyal, and stubborn — even if somewhat unreasonable and intolerant at times.

Dennehy brings all those qualities to his sheriff's role as well as a handful of mixed emotions, jumping from one to the other with ease. For instance, he's got this angry and befuddled look on his face, both at the same time, as Rambo goes on the rampage and Trautman instructs him to diffuse the situation. In another scene, he looks totally lost and probably wouldn't have minded a little help from mama. In the final scene on the roof, just before falling through the skylight, Teasle, rifle in hand, scampers from one end of the terrace to the other trying to spot Rambo in the arson night. I thought he looked like a little kid with a toy gun playing cops and robbers with friends.

Dennehy is convincing as the bigoted Sheriff Teasle because he is a very gifted and a natural actor. It's a role that fits him perfectly. His body of work is enormous and I have decided to watch some of his earlier films and television series. My first Brian Dennehy film was Ron Howard's Oscar-winning Cocoon (1985) where he plays Walter, an alien who leads a group of aliens to earth, on an unusual mission.

So then, here's a question: If not Brian Dennehy in First Blood, then who? My choice would be Gene Hackman. I can see the similarities. Can you?
Written by Prashant C. Trikannad at 05:34:00