Lamb to the Slaughter by Roald Dahl, 1953

In celebration of ‘Crime Fiction of the 1950s’ for Friday’s Forgotten Books (and short stories) over at Patti Abbott’s blog Pattinase.

The room was warm, the curtains were closed, the two table lamps were lit. On the cupboard behind her there were two glasses and some drinks. Mary Maloney was waiting for her husband to come home from work. 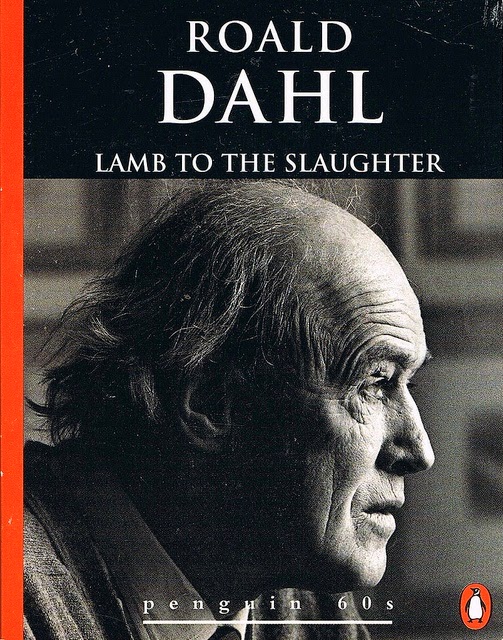 I’m going to keep this review short as Lamb to the Slaughter, an unexpected crime fiction by Roald Dahl, is only 2,393 words long.

Devoted housewife Mary Maloney is beside herself with joy when her husband, police detective Patrick Maloney, returns home after a long and tiring day at the police station. She idolises her husband and looks forward to his company each evening. They sit opposite each other and sip their drinks.

Mary is glowing. She is sewing, probably clothes, for their unborn child. After finishing his second drink, Patrick breaks the news to her, quietly and gently. He tells her that he has thought about it a lot and that there is no other way. He promises to give her money and take care of her needs. The reader can only infer that he is leaving her for another woman.

Mary is puzzled and shocked. She gets up from her chair, leaves the room, and returns with a big frozen leg of lamb that she and Patrick were going to have for supper. When her husband tells her that he is going out, Mary finds a new, if chilling, use for it.

Lamb to the Slaughter is not so much about the murder of Patrick as about a calm and composed Mary who prepares herself before ringing up his friends at the police station, to report the tragedy that is about to destroy her beautiful life.

I, for one, did not know that British novelist Roald Dahl had written a crime story bordering on noir and police procedural with a strong whiff of dark comedy. Included in Dahl’s anthology Someone Like You, this is probably the best short story I've read so far this year. I recommend it highly.

According to Wikipedia, Lamb to the Slaughter was initially rejected by The New Yorker and later published in Harper's Magazine in September 1953. It was adapted for Alfred Hitchcock Presents, 1958, the story appearing on the two-disc special edition DVD of Hitchcock's Psycho, and Roald Dahl's British TV series Tales of the Unexpected. It has also been adapted in other creative forms including cartoon and fabric painting. The idea for the story was apparently suggested by his friend Ian Fleming.
Written by Prashant C. Trikannad at 06:22:00