Another deviation for Tuesday's Overlooked Films, Audio & Video at Todd Mason’s blog Sweet Freedom. Don’t miss out on some real vintage action over there. 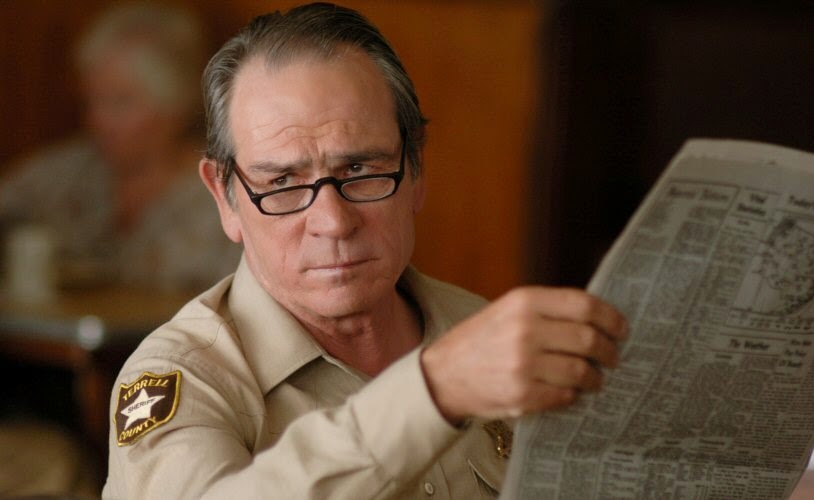 Not long ago, we were watching The Fugitive when a member of the family remarked that Tommy Lee Jones was a very good actor and that he looked pleasant on screen. I thought about it and agreed he was pleasing but also brooding at the same time, which far from diminishing his screen presence actually enhances it.

Tommy Lee Jones is one of those unassuming actors whom you don't tire of watching and have a certain comfort level with; someone who puts you at ease in your seat; someone like Morgan Freeman, who provides good entertainment and good value. His characters, at least the ones I've seen, are easy going, laconic, frequently bemused, often flustered, and never really in a hurry chasing good or bad guys, and he has been chasing a fair number of them. His cinematic appeal probably lies in his craggy-faced smile; if you think about it, he does smile a lot.

While watching The Fugitive, for the umpteenth time, it occurred to me that Tommy Lee Jones has been cast as a law enforcer in a number of films. He has been stereotyped as cop, sleuth, agent, ranger, prosecutor, and military man, in character roles that, in fact, suit him well. Occasionally, he has played the saviour outside the confines of the law, as in the disaster flick Volcano and in the thriller The Hunted.

I haven't seen all of his movies—in a television and film career spanning forty-two years—but among the ones I have seen, The Fugitive, The Client, US Marshals, and No Country for Old Men stand out; perhaps, because of the common thread running through them. In all four movies, lawman Tommy Lee Jones is chasing someone or other to the point where he actually looks and sounds alike; whether in pursuit of Dr. Richard Kimble (Harrison Ford) in The Fugitive or the young client of Reggie Love (Susan Sarandon) in The Client and Mark J. Sheridan (Wesley Snipes) in US Marshals or Anton Chigurh (Javier Bardem) and Llewelyn Moss (Josh Brolin) in No Country for Old Men.

The only film where his character looked out of sorts, perhaps owing to the presence of the formidable trio of Bardem, Brolin, and Harrelson, is the Coen brothers’ film, undoubtedly the most violent of the quartet.

Tommy Lee Jones seems to be content in doing the kind of films he has done so far, which is not to say that he doesn't have an impressive body of work behind him.  As he says, courtesy IMDb, “It's no mean calling to bring fun into the afternoons of large numbers of people. That too is part of my job, and I'm happy to serve when called on.” It's what makes him such a likeable actor.

Born in Texas, sixty-eight year old Tommy Lee Jones worked in underwater construction and on an oil rig, had future Vice President Al Gore as his roommate, and is believed to have said that he loved cinema and agriculture.

I have mentioned some of Tommy Lee Jones’ more obvious films while deliberately leaving MIB out. Which of his films do you like?

For previous Actor Profiles, see under Labels.
Written by Prashant C. Trikannad at 10:16:00