It took me a good ten minutes to trace this little-known film on the internet.

When I googled “Out of Order” I got a film by that name but it turned out to be a British comedy I’d never heard of. It had George Baker whom I know from Goodbye, Mr. Chips (1969), but definitely not from I, Claudius, a BBC adaptation, or Ruth Rendell Mysteries (1987-2000) where he plays Inspector Rex Wexford, or a couple of James Bond films I’d seen.

My search also threw up a namesake Rod Stewart album and a 2003 television mini-series that had some fine actors like Eric Stoltz, Felicity Huffman, William H. Macy, Kim Dickens, Peter Bogdanovich, and Lane Smith. I haven't heard or seen either.

I then looked for movies about elevators and actually came up with two, called Elevator, made in 2004 and 2011. Their plot—stuck in the lift and something happens—was similar but neither of the films was what I was looking for.

There should be a universal ban on the use of the same title more than twice for books, films, television, and music. It’d narrow down one's search.

I went back to IMDb and this time scrutinised the results carefully, and there it was, Abwärts (1984) aka Out of Order. And that was when I found out that it was a German film and not a Hollywood product. Abwärts means ‘downwards’ in German. In this film it could mean anything. I don't know if it was dubbed in English. I saw it thirty years ago. 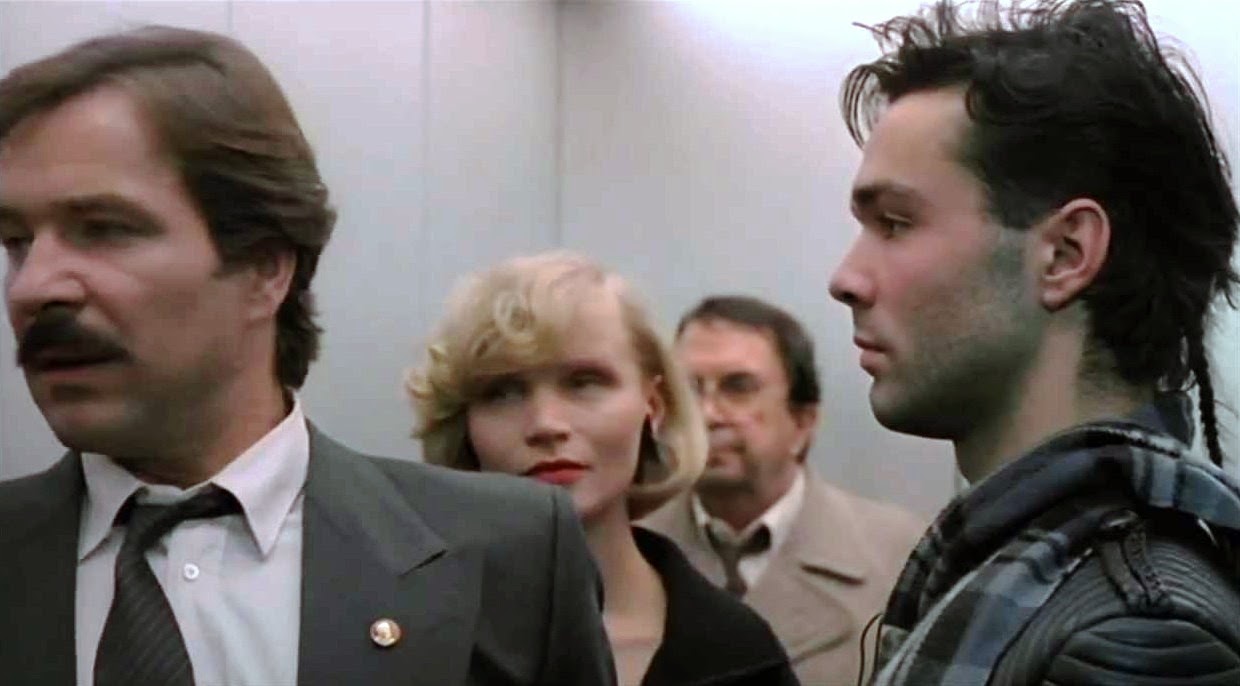 Directed by Swiss-born Carl Schenkel, Out of Order is a mini thriller about four strangers—three men and a woman—who are trapped in a small high-rise elevator on a Friday evening. The lift has been under repairs, the alarm system is not working, and there is little oxygen. Will the four people come out alive on Monday? And even if they manage to survive the next seventy-two hours, can they survive each other in the interim?

The occupants include an elderly bookkeeper who has robbed his employer and is carrying the stash with him, a middle aged man and his girlfriend, and a young man. Inevitably, tempers fly, egos clash, and conflicts arise. As I remember the boyfriend and the young man quarrel from the start, right through their efforts to find a way out of the lift. The girl flirts with the young man which makes it worse for everyone inside. By the time they're rescued, a lot happens, and it’s no longer about spending a few claustrophobic hours in the elevator without food and water. The end is a bit of a cliffhanger.

An article on Wikipedia sums up the film thus: “The main theme of the movie is the sudden life threatening situation unsuspecting people find themselves in the most normal of circumstances on a most usual day. The film also explores the rivalry between men over a woman and being faced with becoming obsolete, either by being fired like Gössmann, who is too old to learn to adapt to computer bookkeeping and apparently also Jörg, being fired for unspecified reasons and losing his lover to another man.”

Out of Order is a stark depiction of human nature and its shortcomings as evident from the dishonesty, insecurity, and jealousy of the four disparate characters none of whom stand out in the movie.

Apparently, the film and its maker received both critical acclaim and several awards. Carl Schenkel (1948-2003) also made Tarzan and the Lost City (1998), Knight Moves (1992), and The Mighty Quinn (1989), and the television movies Murder on the Orient Express (2001) with Alfred Molina as Hercule Poirot, and Missing Pieces (2000) with James Coburn in the lead.
Written by Prashant C. Trikannad at 03:58:00