Everything was aimed at satisfying the whims of women. The popular clichés, the pretty romances, the catchwords of advertising became realities; and the compound kept the men enslaved. George knew what he had to do...

If it hadn't been for the cover, which looked like a picture from a vintage issue of Ladies Home Journal, and the catchy blurb, I would not have read this short story by sf writer Irving E. Cox.

Science fiction is riddled with possibilities, such as the uneven matriarchal society in this story where women rule the world and treat men like slaves. Their weapon is a mysterious compound, an addictive love potion, that makes the men amorous and lust after women, all in the name of love. The compound, “a mixture of aphrodisiacs and a habit-forming drug,” forces the men to wait on women and do as their wives say. The potion, stored in a capsule, is secretly brewed at the all-female Directorate Building in Hollywood. 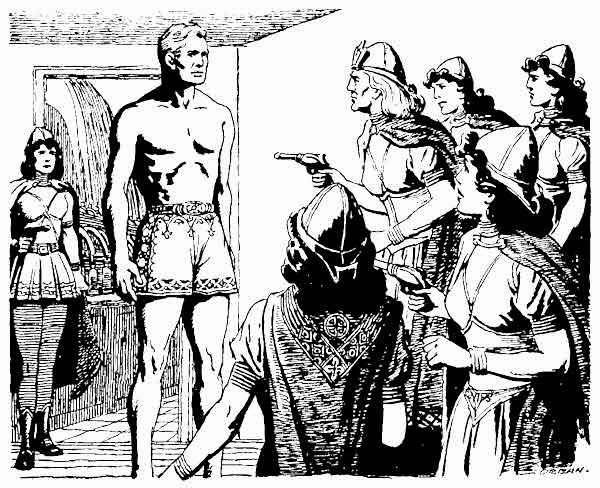 However, not all men allow themselves to be subjugated by females. Many have tried to escape bondage under women and have failed. Nineteen-year old George, a veritable Adonis standing over six feet, has been swallowing the compound as well but his domineering mother doesn't know that he is immune to it. George chooses his marriage to the stunning Jenny Harper, whose mother paid his mother twenty-eight thousand shares as dowry, to plot his revenge against female dominance by targeting the Directorate and destroying the machine that makes the compound.

Love Story is ludicrously sexist. For example, a federal law requires every male to watch television romances three hours a day and failure to do so would mean a three-month sentence to the national hero’s corps, whatever that is, or, worse still, elimination by the Morals Squad. The television romances are meant to “shape male attitudes and emotional reactions” and make the men hunger for women even more. Ironically, however, the women are actually craving to be appreciated, loved, and desired by the very men they seek to control through their potion.

Conversely, bachelors are treated like traitors, enemies of the state, while those who dream of avoiding their matrimonial duties and ditching their wives would have to first break their years-old addiction to the compound.

But is the compound for real and does George succeed in rebelling against women?

Irving E. Cox has written a futuristic story where men, and not women, are marketable products in a matriarchal, and not patriarchal, society. While not overlooking matriarchy in some traditional communities around the world, the role reversal as propounded in this story sounds unthinkable in our times, but it sounds plausible at some point in the distant future. However, if Cox is trying to make a case for gender equality, it's not exactly convincing. Still, Love Story is a nice and readable story.

Irving E. Cox (1917-2001) was a prolific sf writer of short stories, short fiction, and anthologies. Some of his noted works include Adolescents Only and The Instant of Now (1953), The Cartels Jungle and The Guardians (1955), and Impact (1960). All these stories including Love Story are available online.
Written by Prashant C. Trikannad at 11:32:00