Steamboats on the Mississippi 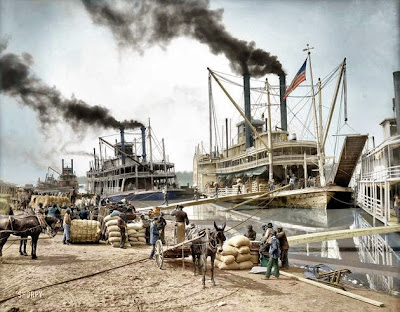 I received this lovely photograph of steamboats on the Mississippi River, 1907, by email. It shows hectic activity on the 6,210-km (3,860-mile) long river which rises in northern Minnesota and flows southward into the Gulf of Mexico. Steam-powered river boats carried both passengers and cargo up and down the river until the advent of the US railroad in early 19th century. Even then, steamboats continued to play a key role in trade and commerce till the 20th century. Frontier settlements came up in the Mississippi River region as well as on the vast and barren land between the river and the Rocky Mountains. Several rivers like the Missouri, Ohio, Tennessee, and Arkansas are tributaries of this great river. The Mississippi has a rich history. It was the cradle of the Frontier.

For previous Vintage Pictures, see under Labels.
Written by Prashant C. Trikannad at 04:18:00