This Friday, George Kelley takes over the reins of Forgotten Books from Patti Abbott. You can check out the links to many reviews of early and not so early fiction at his blog.

Stories of the old West were filled with bad men who lived by the speed of their gun hand. Well, meet Buck Tarrant, who could outdraw them all. His secret: he didn't even have to reach for his weapon...

Buck Tarrant was a terrific shot, once he got his gun in his hand. Until then, he could only dream of taking Billy the Kid and “Wild Bill” Hickok and being the fastest gun from Mexico to Canada.

“He couldn't draw to save his life.”

And then one day something happens. Tarrant is practicing in front of a tree, pretending the tree is Billy the Kid, crouching, fumbling, drawing, shooting, when Joe Doolin, a local cowhand and narrator of the story, comes along on horseback. Mimicking the folks in the little town in Texas, Doolin pokes fun at Tarrant and nearly falls off his saddle when out of nowhere he sees the gun in the hands of the “bony runt of about eighteen.”

“I swear, I hadn't even seen his hand move, he'd drawn so fast! That gun just practically appeared in his hand!”

Suddenly, Doolin finds himself at the receiving end of Tarrant’s Peacemaker and his foul mouth. The terrified narrator knows he is a goner. But, the no-good kid with bulging eyes, a wide mouth, and buck teeth has other plans: he wants revenge against the townsfolk and he wants to prove he is the fastest gun alive. He orders the cowhand to run into town and tell Sheriff Ben Randolph that he, Tarrant, is coming for him.

The sheriff, who had collared the wayward boy on a few occasions, has two choices—he faces Tarrant or he gets out of town. Randolph decides to confront Tarrant. He is brave and quick on the draw but is he a match for the wild and reckless ‘gunman’?

That afternoon, Tarrant, looking ugly and fearsome, rides into the deserted town and goes into the Once Again Saloon for some free “likker” and a little fun at the expense of Menner, its owner, who had turned him out a couple of times. He uses the poor bartender’s ears for target practice. 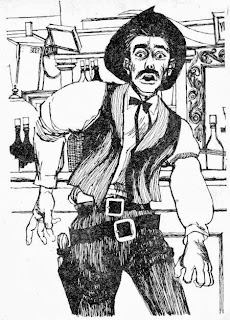 “You know,” Buck said, grinning at how Menner's fear was crawling all over his face, “I can put a bullet right where I want to. Wanta see me do it?”

The twist in the tale comes in the form of Jacob Pratt, a professor of psychology who is passing through town on his way to San Francisco and, unlikely as it may seem, is at that moment sitting in the saloon nursing a drink. He finds out the reason behind Buck Tarrant’s newly-acquired speed with the gun: telekinesis. Tarrant thinks his gun into his hand and thinks it back into its holster.

“He just thinks his gun into his hand?”
“Exactly.”
“Faster than anyone could ever draw it?”
“Inconceivably faster. The time element is almost non-existent.”

If you want to know what happens to the gunfight between Buck Tarrant and Sheriff Ben Randolph, then you should read this very unusual 7,114-worded story. It’s fast-paced and entertaining all the way to the end.

Final word
Jerome Bixby has written a story with a time-tested theme, of a half-crazed cowboy who desperately wants to prove he is the deadliest gunman, and added a scientific element to it. The author’s work in science fiction may have inspired the tale. If Bixby meant to experiment, then he succeeds very well. He doesn’t tell us in which year or period the story is based. Given the setting, I'm assuming it is well before 1890, the year the term “telekinesis” was officially coined. In that sense, The Draw is before its time. Either way, the story is improbable but imaginative and I thoroughly enjoyed reading it.

About the author
Jerome Bixby (1923-1998) was an American short story writer, editor and scriptwriter. However, he was best known as a science fiction writer. Below are five important things about Bixby.

2. He was the editor of Planet Stories and Two Complete Science Adventure Books.

3. He wrote the 1953 story It's a Good Life which became an episode of The Twilight Zone and was later included in Twilight Zone: The Movie (1983).

4. He wrote four episodes for the Star Trek series and co-wrote the story for Fantastic Voyage (1966), the classic sf movie based on a novel by Isaac Asimov.

5. He completed the screenplay of The Man From Earth in his final days. In 2007, it was made into a film, produced by his son Emerson Bixby and directed by Richard Schenkman.

You can read more about Drexel Jerome Lewis Bixby at Wikipedia, sfsite, and Weird Fiction Review. Todd Mason has often written about the writer at his blog Sweet Freedom.
Written by Prashant C. Trikannad at 05:14:00