Who Is Killing The Great Chefs Of Europe?

First things first. I have neither read the book I purchased four years ago nor seen the film I read about subsequently. I found this book in a cupboard while looking for some other book and couldn't wait to write about it. 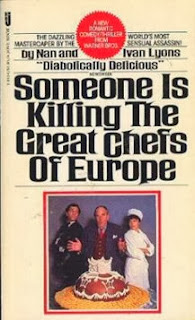 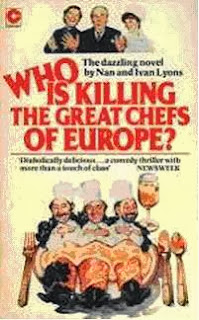 Originally published as Someone Is Killing The Great Chefs of Europe, 1976, this 239-page novel by Nan and Ivan Lyons is a comic-murder mystery. Someone is killing Europe’s most famous chefs "in a manner that reflects their most famous dishes." For instance, the lobster chef is drowned. Even more intriguing is that the recipe for each dish is given in the book.

This is what the back cover of my 1979 Coronet edition (above right) says, “While the world’s sexiest cook prepares her ‘Bombe Richelieu’ for dessert at Buckingham Palace, a connoisseur criminal who makes Jack the Ripper seem like a vulgar amateur is serving up the bloodiest master-caper ever conceived. An outrageous mixture of liberated pleasure and gourmet violence sizzling with surprise-a-page suspense…”

And here are the first lines of the book: “Lacquered to perfection. Crisp skin. Warm moist pancakes. Spring onions and sweet bean sauce. Yes. If he were to leave London immediately, within eighteen hours he could be in Peking.” 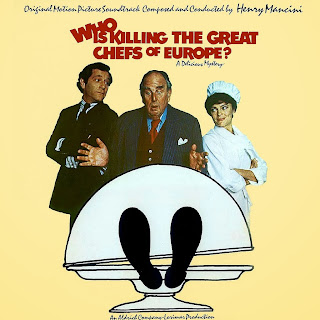 In 1978, Ted Kotcheff (of First Blood fame) made a film starring George Segal, Jacqueline Bisset, and Robert Morley. It had music by Henry Mancini. The film was released as Too Many Chefs in the UK.

Have you read the book or seen the film?


For actual reviews of Forgotten Books this Friday, go to Patti Abbott’s blog Pattinase.
Written by Prashant C. Trikannad at 03:56:00