Tom Clancy was one of my favourite authors of spy thrillers. His Cold War novel, The Hunt for Red October, tops my list of those of his books which I have read.

His novels were technically brilliant and technologically superior. In this regard he was ahead of all his peers. In fact, he was probably the only one to write the way he did. Frederick Forsyth and John le Carré are known for writing highly researched novels but mostly in a non-technical way. 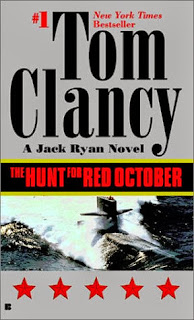 Clancy was a fearless writer. For instance, in Red October, he took the reader into the bowels of a submarine and not only explained how it worked but also compared it with rival U-boats. Going into a sub is one thing, writing about its nuts and bolts is another (I don't know if Clancy actually went into one). My knowledge of a submarine is restricted to its periscope and torpedo. I know what the two things are used for but it was Clancy who explained in some detail how to look through the first and fire the second.

The author of several entertaining thrillers like Patriot Games, Red Storm Rising, and Clear and Present Danger had a large number of fans in the US and other world militaries including, I suspect, secret admirers in the then Soviet (now Russian) navy.

As far as spy thrillers go, Tom Clancy was in very good company. He is part of my list of 10 of the best writers of espionage books. I have mentioned the other nine below, along with titles of novels that I think are their best. Actually, I like all their work.

04. Frederick Forsyth – The Day of the Jackal

05. Alistair MacLean – The Guns of Navarone

Of all these writers, the last two, Thomas and Lindquist, have been forgotten. I recommend their books to those who haven't read them.
Written by Prashant C. Trikannad at 23:59:00