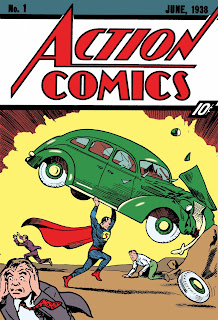 The only time you hear or read about Action Comics #1, 1938, is when newspapers report the sale of the first issue of the comic book to the highest bidder for over a million dollars, which has happened on a few occasions. Comic buffs who cannot even think of bidding for one can read this rare comic, or a part of it, online, as I did. It’s a very small consolation for one who is short of a million by several zeroes.

Action Comics #1 requires no formal introduction. Nor do Jerry Siegel and Joe Shuster who used it as a storyboard to bring Superman into our world. I’d never read the comic before and when I finally did, I was intrigued by a few things.

The Man of Steel, who is not known thus, has evolved by leaps and bounds from his era, the Golden Age, through the Modern Age of Comic Books. Neither is Superman’s real name, Kal-El, mentioned anywhere, which isn't surprising as his birth planet, Krypton, isn't mentioned either. He bears the name Kent even though his foster parents, Jonathan and Martha Kent, are not in the picture yet. 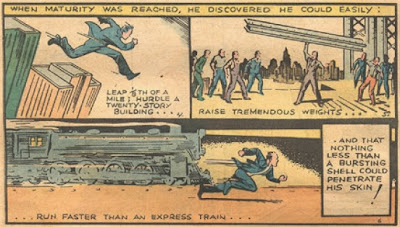 Clark Kent, a reporter with The Daily Star and not The Daily Planet, is in love with Lois, not Lois Lane, who on her part is patronising towards him. She prefers his alter ego, although that isn't so obvious. When some hoodlums accost her, Kent plays it down by urging her to leave the dance hall. Lois, ever the feisty gal, slaps one of the men as Clark mutters “Good for you, Lois!” She then stomps off with the “spineless, unbearable coward” running behind her. When the gangsters kidnap her, he sheds his suit and dons his caped costume, the iconic Superman logo just a crude letter 'S'.

Among other things, Superman doesn't fly as much as he leaps in the air, climbs up the face of a building, and walks the tightrope. But he does smash cars and steel doors and takes bullets that ricochet off his chest.

I found this first issue interesting for two reasons.

One, Superman plays detective when he wakes up the governor in the middle of the night and gets him to pardon a girl minutes before she is to be put to death for a murder she didn’t commit. He leaves the real murderess tied up on the governor’s lawns.

Two, he gets involved in a family squabble when he slams an ugly looking man into the wall for beating his wife senseless.

As expected, Superman displays his feats of strength right from childhood, lifting a couch and a steel bar, racing a train, and clearing tall buildings with a giant leap. In one unit, his amazing strength is compared, scientifically, to that of an ant and a grasshopper.

While the comic is primitive by today's standards, as is to be expected, I was happy to see that the basic persona of Clark Kent/Superman has largely remained intact over the last 75 years. This is a rare treat for comic book lovers.

But did you know that Action Comics #1 is an anthology of 11 comic book stories? I did not. I have reproduced the rest of the contents below.

Zatara, the master magician, and Pep Morgan by Fred B. Guardineer, American illustrator and comic book writer-artist during the Golden Age of Comic Books, best known for the western series The Durango Kid.

Sticky-Mitt Stimson by Alger (real name: Russell Cole), another writer-artist from the Golden Age, created many of the early issues of Action Comics and Detective Comics.

The Adventures of Marco Polo by Sven Elven, who contributed artworks to various comic books including Fawcett and Centaur in the 1930 and 1940s.

Tex Thompson, which was created by comics publisher-writer-editor Bernard Baily (with Ken Fitch), was a DC superhero known as Mr. America and The Americommando. He also created Spectre and Hourman.

Stardust by The Star-Gazer. I have no idea who he (or she) was.

Odds 'N Ends by Sheldon Moldoff, who died last year, was an American comic book artist whose famous characters included Hawkman and Hawkgirl, and Black Pirate (Jon Valor). He was one of Batman creator Bob Kane's ghost artists and went on to co-create other DC superheroes and supervillains like Poison Ivy, Mr. Freeze, Bat-Mite, Bat-Girl, Batwoman, and Ace the Bat Hound.

I intend to track down some of these early comics online.

My previous posts related to Superman

1. The Mighty Marvel Superheroes’ Cookbook
2. How Superman Would End the War
3. Shazam! I am Superman
4. Comics to cinema: journey of the superhero
Written by Prashant C. Trikannad at 05:32:00