The Giant Has Fleas

The world's first hardboiled detective was, apparently, created by Carroll John Daly (1889-1958) and not Dashiell Hammett (1894-1961) as lot of people think. I thought so too, but that is because Daly has largely remained in my peripheral vision unlike Hammett whose novels I have read in the distant past. 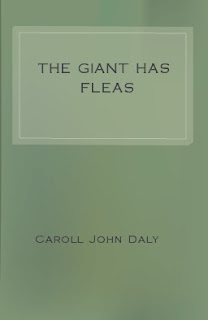 Daly invented Race Williams a few months before Hammett produced The Contintenal Op. Both the hardboiled private detectives made their debut in Black Mask magazine in 1923, Race Williams in June and The Continental Op in October of that year. Their names sound like the names of superheroes.

Daly brought his most famous detective to life in the imaginatively titled Knights of the Open Palm. While searching for this short story online I stumbled upon another short story by him, The Giant Has Fleas, published in Detective Story Magazine in February 1947. I read the 15-page story partly because of the title and partly because I wanted to get acquainted with Daly's work anyway.

In this story the American author introduces us to Eddie Blair, a cool-headed detective whose obsession with prosecuting gangster Joseph R. Fenton, a childhood acquaintance, for a woman's murder nearly costs him the sergeant's post and his reputation.

Blair is, however, unconcerned about the rank or his name as he pursues big man Fenton with single-minded focus, so much so that Inspector O'Leary, his mentor and superior, reminds him of his other cases, their trails gone cold. Not for long, though, as Blair quietly produces evidence in an envelope. That's how he works.

Leary is weary of going after Fenton, a powerful man, whose probable arrest, conviction and trial would "shake the very foundations of the city government...shake the confidence of the citizens." The inspector is indirectly asking Blair to lay off Fenton because even if he did have clinching evidence against the gangster, it would be to risky to bring it out into the open.

But, "Joe Fenton" — he laid emphasis on the "Joe," noticing the inspector's use of the "Joseph" — "was and is the greatest single menace to law and order and decent government in the city today."

Unrelenting in his pursuit of Fenton, the detective uses the fleas on the giant's back to get to him — the boys who either knew Fenton or were friends with the racketeer.

As Blair tells Leary, "I'm sort of messed up on Big Joe Fenton. Now I'm having a little fling. I like to call it an investment in..."

"In what?" asked the inspector.

"Fleas," said Eddie, and went out of the room whistling.

He invests in one of Big Joe's fleas called Gunner Duncan, a killer, whose mind he poisons against the gangster...

Joseph R. Fenton is soon found dead. That's how Eddie Blair likes it. Get the fleas to go after the giants and then go after the fleas.

"Fascinating thing, fleas. Even giants have them."

The Giant Has Fleas is a clean tale and moves at a fairly brisk pace. The narrative is compact with little room for details or descriptions, of characters and settings. A straitjacketed story but quite readable.
Written by Prashant C. Trikannad at 05:42:00