This weekend I read two sf short stories by William F. Nolan, the 84-year old American writer of science fiction, fantasy and horror stories, who I discovered for the first time while searching the internet for something specific. Both the stories are well written and were featured in the Fantastic Universe Science Fiction magazine.

Of Time and Texas

“A groundless fear, boy,” assured Ohms. "I have seen to it that the Time Door can never be closed. And now, good-bye, gentlemen. Or, to use the proper colloquialism — so long, hombres!”

The first story, Of Time and Texas, is just 595 words, far short of the Gutenberg legal text of over 3,000 words.

In this hilarious story, written by Nolan in November 1956, Prof. C. Cydwick Ohms unveils the C. Cydwick Ohms Time Door with a grand flourish before a group of reporters and photographers. The Time Door — and not a Time Machine which the professor dismisses as “wild fancy” — will transport people from their world of 2057 to the past, Texas of 1957, and solve mankind’s greatest problem — overpopulation. The professor is confident that his Time Door will succeed where colonising the Polar wastes and birth control programmes didn’t. 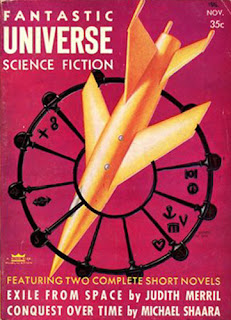 The professor chooses Texas in the southwest because it has vast lands to absorb people from the future. The only hitch is that the Time Door is a one-way ride: you can re-enter the past but you cannot return to your present.

Prof. Ohms, draped in "an ancient and bizarre costume," steps into the Time Door and prepares to vanish into the past but nothing happens. He is still inside the contraption, blinking. Just as the professor bemoans his failure, the assembled journalists hear a slow rumbling coming from within the Time Door. As the sounds grow louder and closer, the terrified reporters and photographers run for the stairs, and Prof. Ohms finds himself straddling one of the 3,000 Texas steers charging into his laboratory.

I had a strong feeling that the Time Door would work in the reverse direction. I couldn’t imagine the story ending any other way. It was fun to read, especially the part where one reporter asks Prof. Ohms in earnest, “What if the Texans object?” He says, "They don’t have a choice."

He was running, running down the long tunnels, the shadows hunting him, claws clutching at him, nearer...

Nolan wrote Small World (also known as The Underdweller and The Small World of Lewis Stillman) in August 1957. It’s much longer at nearly 3,700 words and, unlike Of Time and Texas, is a grim tale that reads more like horror than sf.

Lewis Stillman is, or rather was, a construction worker and the lone survivor of an alien invasion that has destroyed all human beings above the age of six. He has been living in the storm water tunnels beneath the city of Los Angeles for three years — living in hope that he will one day find another like himself; living in fear of the hideous “creatures” that prowl the ground above. Only hunger forces him out of the drains and even then he never risks going anywhere without his trusted gun, for he has been pursued by the aliens more than once. 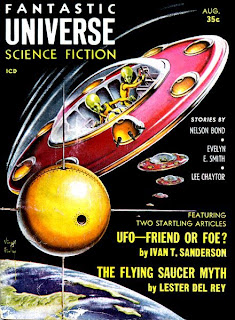 One day, Lewis, whose father wanted him to be a doctor, has a sudden desire to read a particular set of medical books — Erickson's monumental three-volume text on surgery — which he had read in pre-med school. Armed with the small gun and a .30-calibre Savage rifle, two of several arms he took from the LA police arsenal, Lewis sets out for Pickwick’s bookstore in Hollywood where he finds the “richly bound and stamped in gold” volumes. His luck finally runs out as he steps out of the store with the carton of books.

“The entire lower floor was alive with them! Rustling like a mass of great insects, gliding toward him, eyes gleaming in the half-light, they converged upon the stairs. They had been waiting for him.”

William F. Nolan, who co-authored the novel Logan's Run with fellow science fiction writer George Clayton Johnson, has a clear style of writing and his prose flows smoothly across the page. Also, the first thing I noticed about Nolan’s writing is that he doesn’t confound you with big words and keeps his plots and characters simple. I can’t judge his writing on the basis of just two short stories and I am looking forward to reading his various series of novels.