Peter Benchley's Jaws and The Deep 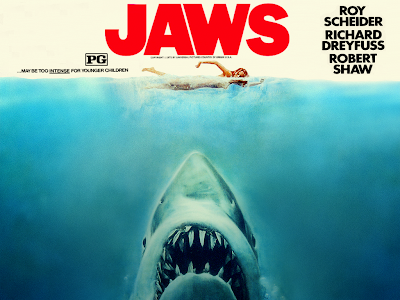 In case you forgot who said those words, it was Amity Island police chief Martin Brody (Roy Scheider) after he shoots at a scuba tank and blows up Jaws.

I saw Jaws a few years after it was released in 1975 but I didn't know it was directed by Steven Spielberg. In fact, I didn't even know who Spielberg was back then. I saw the movie on a cousin's VCR and it was only much later I realised that you don't watch a film like Jaws on video. You need Jaws to come after you on 70 mm, quietly and stealthily, and drag you under. I had taken the bite right out of the flesh-eating monster's mouth.

So then, I came to know of Spielberg only after E.T. (1982) and by then I'd also seen Close Encounters of the Third Kind (1977). This was a period when I used to watch lots of films without bothering to find out who the directors were. I was barely getting acquainted with the actors.

I'm not going to review Jaws the film, which, thirty-seven years later, continues to hold its own, as a cult film and the biggest grosser before Star Wars (1977) came along. For me, Jaws is not about an ugly great white shark attacking unsuspecting beach-goers in the resort town of Amity Island. It's the scary music by John Williams that presages the coming of the killer fish. You know something horrible is going to happen to people who know absolutely nothing about it, and there's no way you can warn them off. Mute the volume and Jaws is like a toy fish in a bathtub. Spielberg and Williams knew how to jangle our nerves.

Apart from the music, the other highlight of the film is the sombre performance by Roy Scheider who wages a lone battle against Jaws, the seafaring shark, and Mayor Lawrence ‘Larry’ Vaughan (Murray Hamilton), the land shark. Vaughan refuses to close down the beach so the town council can reap profits during the holiday season. It's left to the police chief to hunt down Jaws with the help of oceanographer Matt Hooper (Richard Dreyfuss) and shark hunter Quint (Robert Shaw).

The film has its tense moments, like the time when Hooper goes underwater in a cage which is destroyed by the shark or when the half-crazed Quint, a former shark survivor, stops Brody from calling the coast guard for help or when the shark hunter slides down the deck of the half-submerged boat and straight into the open jaws of the great white. In the end, the brave police chief blows the monster out of the water.

Jaws was based on a novel by American writer Peter Benchley who wrote two other thrillers set in and around the high seas and which were made into films—The Deep (1977) and The Island (1980). I read all three books a very long time ago though I've only seen Jaws and The Deep. 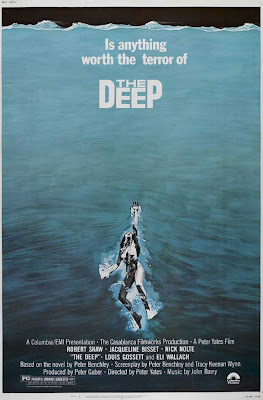 The Deep, directed by Peter Yates, is a suspense film that did well at the box office but wasn't quite as successful as Jaws. Unlike the latter, I can recollect almost nothing about this film, except that it has a lot of underwater scenes. I also remember being scared out of my skin when Gail Berke (Jacqueline Bisset) screams when she suddenly spots a hideous face in the window in the dead of night.

To refresh my memory, I read about The Deep on the internet: it's an action-packed adventure film about a young vacationing couple, Gail Berke and David Sanders (Nick Nolte), who discover artifacts, including a mysterious ampule of amber-coloured liquid and a medallion, while scuba diving near shipwrecks off the shark-infested coast of Bermuda. That little discovery sets them on a dangerous course against evil treasure hunters who'll stop at nothing to get the ampule.

A few observations to round up: Jaws and The Deep are shot on high seas or under water; Robert Shaw and man-eating sharks are in both the films; Peter Benchley and Roy Scheider died in 2006 and 2008; Eli Wallach acts as Adam Coffin, the only survivor of a sunken ship, in The Deep; and if I didn't know Steven Spielberg in Jaws, I didn't know Nick Nolte in The Deep either. I met him five years later in 48 Hrs.

This post is offered as part of Tuesday's Overlooked/Forgotten Films over at Todd Mason's blog at http://socialistjazz.blogspot.com


Copyright for film posters: Universal Pictures for Jaws and Columbia Pictures for The Deep
Written by Prashant C. Trikannad at 01:57:00