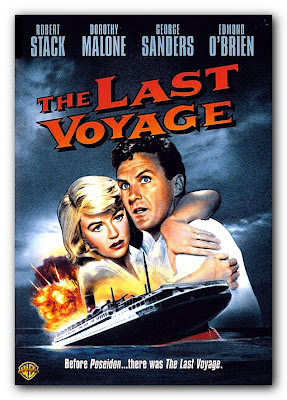 “This is one guy I'm gonna help aboard personally!”

This line is uttered by Cliff Henderson (Robert Stack) as he helps Hank Lawson (Woody Strode) clamber aboard the last lifeboat after an ageing luxury liner, SS Claridon, en route to Japan, goes under.

Lawson, a black man, has just spent a better part of the 91-minute Oscar-nominated film helping Henderson rescue his wife, Laurie (Dorothy Malone), from the wreckage of their cabin which is hit by a huge explosion in the boiler room. Lawson, a tall, bare and muscular handyman in the engine room, could have abandoned the sinking liner with the rest of his mates but decides to stay back and help Henderson extricate his wife from the debris. He also ensures the safety of their four-year old daughter by putting her on board one of the fleeing lifeboats.


The Last Voyage, written and directed by Andrew L. Stone, moves at a slow pace and the long wait – till Laurie is rescued just as the ship goes down completely – is agonising for the viewer. Will she or won’t she make it? You’re relieved that she makes it in the end, with plenty of help from Second Engineer Walsh (Edmond O’Brien) towards the end. At one point, as her devoted husband Cliff runs around frantically for help, Laurie contemplates slashing her wrist with a shard of glass lying nearby so that at least her distraught husband can save himself. She decides against killing herself because she knows losing hope is half the battle lost.

The film is realistic for its portrayal of a huge ship in distress, the scramble for survival among its hundreds of passengers, a captain (George Sanders) who refuses to believe his ship is sinking, and the respect that he, as Captain Robert Adams, commands among his junior and senior officers. For me, the defining feature of The Last Voyage is the portrayal of racial equality among men as they come together in a desperate bid for survival.


Hank Lawson, with a smile on his face and a kerchief around his neck, is endearing throughout the movie as he refuses to ditch Cliff Henderson and save his own life, because he knows it could have been his wife trapped down there.