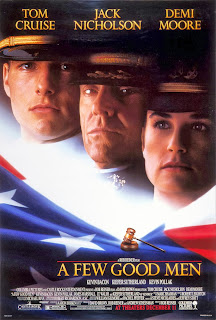 A Few Good Men can be classified as an overlooked film if you haven't seen it yet. It is by no means a forgotten movie: I have seen it more than once.

The final courtroom battle between rookie lawyer Lieutenant Daniel Kaffee (Tom Cruise) of the US Navy and highly decorated Col. Nathan R. Jessup (Jack Nicholson), Commanding Officer, US Marine Corps, Guantanamo Bay Naval Base, is the decisive moment in the entire film. Take this 20-minute high-voltage scene out and Judge Col. Julius Randolph (J.A. Preston) might have dismissed the court martial proceedings as a tad too boring.

Kaffee and his two assistants, Lieutenant Commander JoAnne Galloway (Demi Moore) and Lieutenant Sam Weinberg (Kevin Pollak), try all means to successfully defend the two US marines charged with the murder of a fellow marine, Private Santiago, at Guantanamo Bay. The defendants are accused of carrying out a Code Red order, “a violent extrajudicial punishment,” that Kaffee suspects was ordered by Jessup. He has no evidence to nail the colonel. As a last ditch attempt and at the risk of jeopardising his fledgling career, he puts the acerbic naval officer in the dock, in the thin hope that Jessup's military arrogance and disdain for the civilians he defends will be his undoing.

Aside from Cruise, Nicholson, Moore, and Pollak, A Few Good Men has a few more top actors in the form of Kiefer Sutherland, Kevin Bacon, Cuba Gooding, Jr., and J.T. Walsh. But it's Cruise who steals the show with a very fine courtroom performance supported by the rest of the able cast that you can't help thinking might have been quietly told that this was his film; except for Nicholson, who is in his element as the thundering Col. Jessup. Those last 20 minutes are entirely his.

Before I leave you with the high-decibel verbal duel between Cruise and Nicholson (courtesy: IMDb), here’s a question: which other actor would have fit into Col. Jessup’s shoes? My answer: Gene Hackman. Check him out in Crimson Tide (1995) and Behind Enemy Lines (2001).

Now then, read how Nicholson cuts Cruise down to size…

Col. Jessup: You can't handle the truth! Son, we live in a world that has walls, and those walls have to be guarded by men with guns. Who's gonna do it? You? You, Lt. Weinburg? I have a greater responsibility than you could possibly fathom. You weep for Santiago, and you curse the Marines. You have that luxury. You have the luxury of not knowing what I know. That Santiago's death, while tragic, probably saved lives. And my existence, while grotesque and incomprehensible to you, saves lives. You don't want the truth because deep down in places you don't talk about at parties, you want me on that wall, you need me on that wall. We use words like honour, code, loyalty. We use these words as the backbone of a life spent defending something. You use them as a punch line. I have neither the time nor the inclination to explain myself to a man who rises and sleeps under the blanket of the very freedom that I provide, and then questions the manner in which I provide it. I would rather you just said thank you, and went on your way, Otherwise, I suggest you pick up a weapon, and stand a post. Either way, I don't give a damn what you think you are entitled to.

A Few Good Men is directed by Rob Reiner (When Harry Met Sally, The Bucket List) and written by Aaron Sorkin (The West Wing) based on his play, of the same name, and which was apparently inspired by his lawyer sister’s proposed visit to Guantanamo Bay to defend some marines who nearly killed a fellow marine.