Stamp of a Writer: Margaret Mitchell

The following quotes of Margaret Mitchell have been taken from an interview she gave Mrs. Medora Perkerson of The Atlanta Journal Sunday Magazine and broadcast over radio station WSB, Atlanta, Georgia, on July 3, 1936. The interview was published for the first time in a digital format at PBS. You can watch the full documentary, Margaret Mitchell: American Rebel, here and read the full text of her interview here. The Civil War had a major influence on her life and shaped her only major work. 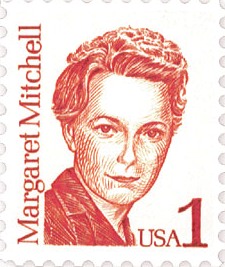 "When I was a child I had to hear a lot about the Civil War on Sunday afternoons when I was dragged hither and yon to call on elderly relatives and friends of the family who had fought in the war or lived behind the lines. When I was a little girl, children were not encouraged to express their personalities by running and screaming on Sunday afternoons. When we went calling, I was usually scooped up onto a lap, told that I didn't look like a soul on either side of the family and then forgotten for the rest of the afternoon while the gathering spiritedly refought the Civil War."


"While I’m talking about knees and laps, that cavalry knees were the worst knees of all. Cavalry knees had the tendency to trot and bounce and jog in the midst of reminiscences and this kept me from going to sleep." 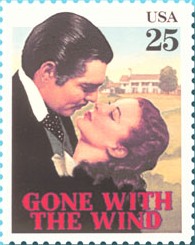 "If Gone With the Wind has a central theme, I suppose is the theme of survival. What quality is it that makes some people able to survive catastrophes and others, apparently just as brave and able and strong, go under? I have always been interested in this particular quality in people. We've all seen the same thing happen in the present depression. It happens in every social upheaval, in wars, in panics, in revolutions."

P.S.: Margaret Mitchell was only 49 when she died of injuries sustained after a speeding car knocked her down while crossing Peachtree Street, Atlanta, on August 11, 1949.


For 24 previous Celebrity Stamps, see under Labels.
Written by Prashant C. Trikannad at 03:04:00