“The pull on the door was enough to rock the car and ever so steadily the corpse of Blackie Conley seemed to come to life, sitting up in the seat momentarily. I could see the eyes and the mouth open in a soundless scream with the teeth bared in a grimace of wild hatred.”

Finally, I read a Mickey Spillane paperback after more than two decades. Everything has its own time and place. With me, it’s books.

I don’t remember my first impressions of Mike Hammer, the iconic private investigator created by an iconic crime fiction writer. The Snake, the eighth novel featuring Hammer, gave me some idea.

Hammer is a strong character. He is a tough, no-nonsense detective with a propensity for violence that can at times turn your stomach. In fact, it follows him wherever he goes. He is fearless to the point where he, often intentionally, gets into hostile situations because he knows he will get out alive. He kills easily and effortlessly with his inseparable .45 Colt.

He is open about his investigation and does not hesitate to lay it out before NYPD, in particular Capt. Pat Chambers of the homicide division. Pat is a very close friend and their love for the same woman, Velda, does not come in the way of their friendship or respect for each other. 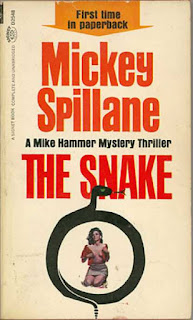 Velda is Hammer’s brave, beautiful, and seductive secretary who loves her boss enough to risk her life for him. She has nothing to fear because she knows Hammer is watching her back.

The Snake is a sequel to The Girl Hunters in which Velda vanishes. I haven’t read that book yet.

The story begins with her sudden reappearance and offering protection to Sue Devon, a young girl on the run from her stepfather, Sim Torrence, a former district attorney who is fighting for the state governorship with an eye on the White House.

Sue believes Sim is out to kill her because he thinks she knows something about the $3 million a gang of robbers stole and botched thirty years ago. She is convinced Sim killed her mother, Sally Devon, a showgirl and the gangsters’ moll, for the money. The girl also keeps talking about someone she refers to as the Snake. 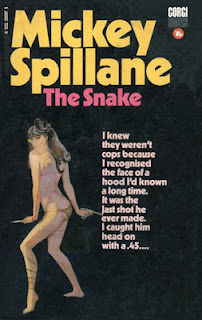 Hammer would probably have stayed out of it if hired killers, operating separately, hadn't taken potshots at him and Velda at the same time, in their desperate bid to eliminate Sue. He kills two of them and wounds the third seriously.

With both he and Velda in trouble, Hammer steps into the firing line to investigate why the girl is wanted badly. He's the sort of guy whose sympathies are with the underdog though, you suspect, he also has a penchant for reckless adventure.

Hammer’s investigations take him back thirty years, to the gang of robbers, to Blackie Conley and Sonny Motley and others who botched the heist, to double-cross, to a young DA who sent them to prison for long years, and finally to the mysterious Snake.

In The Snake, Mike Hammer is constantly on the move, fighting and firing his way out of desperate situations. But, he’s not infallible. In this novel at least Hammer goes into one blind spot too many and is trusting to the point where it nearly costs him and Velda dearly. I found that unusual and I wonder if he’s usually that way in the other novels. 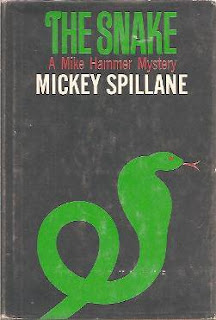 Mickey Spillane has written a cracker of a mystery where the characters, from Hammer downwards, seem all too real, in the kind of story that might have actually taken place in mid-20th century New York. The end is a real humdinger, one I didn't see coming.

First lines from the book: You walk down the street at night. It’s raining out. The only sound is that of your own feet.
Written by Prashant C. Trikannad at 10:38:00