The copyright-free world of books has given me access to some rare and vintage books on India written during and after the British occupation of the subcontinent. Most of these books are authored by Englishmen who lived and worked in India or travelled extensively between India and England, both in their personal and professional capacity. Some of these books are also written by Americans.

The books I have read so far chronicle the rich social, cultural, economic, and political diversity of India. I believe they provide a fairly objective picture of life in India, as it existed then, and underline the strengths and weaknesses of the country and its people, without prejudice.

One particular book written neither by an Englishman nor an American that caught my fancy was India To-day by Oliver Bainbridge, an author and lecturer from Australia. He travelled widely across Europe, Japan, China, India, and the Pacific islands, and wrote about his experiences and discoveries in each of the countries.

Bainbridge died at the age of 46. By then, he had written many travel books. An obituary in The Sydney Morning Herald of April 11, 1922, noted: “He next spent several years in India as the guest of ruling princes, writing further books, entitled India To-day and The Truth About Britain in India. Amongst his other works are Our Ally, Japan, The Balkan Tangle, Rambles in Thoughtland, and The Lesson of the Anglo-American Peace Centenary. He was an ardent Imperialist, and it was his ambition, as one who thoroughly understood the problems and resources of the British Empire, to unite it closer in bonds of affection and general intercourse.”

I was fascinated by the fifth chapter in India To-day. Titled 'Babu English', it provides many hilarious examples of the semi-literate manner in which Indians wrote in English. Before I reproduce a few of these, a brief explanation on the origins of the word ‘Babu’.

The word ‘babu’ originally came from the Bengali word for a gentleman. Today, Bengali is one of the major Indian languages, spoken by the people of West Bengal, a state in eastern India. The British referred to the administrative staff, the clerks, as babus. Why they did so, I have no idea. It was also considered the equivalent of “mister” or “sir”. 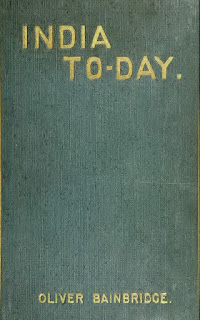 Since the 20th century, ‘babu’ became synonymous with bureaucrats as well as with red tape, inefficiency, and corruption. That is pretty much the opinion of Indians today. Any government official who demands a bribe to get work done and moves lazily or shirks work is one afflicted by the ‘babu mentality,’ a derogatory reference. Today, Indian citizens would be only too happy to avoid going to a babu for any kind of work, for the work rarely gets done in quick time or without a little chai-pani, which actually means ‘tea and water’ but in this context it refers to a petty bribe.

According to an article on Wikipedia, “The distinguishing characteristics of Babu English (back then) are the florid, excessively polite, and indirect manner of expression, which have been reported for amusement value, in works such as Cecil Hunt's Honoured Sir collections, and lampooned, in works such as F. Anstey's Baboo Jabberjee, B.A., for over a century.”

You will find considerable amusement in the following examples of Babu English:

An application for quarters to be repaired

Sir,
We beg most respectfully to inform your honor, that the house allot to us by Railway Company for our residences have many leakings in its roof, for which we are suffering the much troubles, also our wives, and family.

Also we have utmost difficulty to prepare our foods and in rain time it cannot be done therefore all our bellys remain empty in night time which is not good for our health's sake.

Kindly order for full repairs of all our habitation at earliest date for which act of clemency we shall be ever prayed.

Complaint made to a magistrate by the headman of a village

Sir,
Most respectfully, and with deepest humility, I beg to draw your attention that the village in which place is my home, is being repeatedly devastated by a man-eater tiger who scarcely troubles even in time of daylight to conceal himself in the surrounding hill.

For some period his ravage was on catties, and other animals only, but grown more bold by experience of our helplessness he has now chosen to indulge in the human form. Several men, women, and children of all ages have already fallen his victims and are partly eaten by his voracious appetite, and we now fear of our (lives) from shades of evening to morning dawn.

This dreadful monster accustoms himself to prowl about our very door step until some unfortunate being strays a few yards outside, when by one kick of his forward leg, the poor victim is stretched insensible, or dead, after which time he is drag a short distance and eaten so much he wants.

Sir, the native police have no power in the matter, and we have no proper ball gun here, neither we feel confidence in our aims, we therefore hope you to order some European gentlemen to shoot it at your earliest convenience.

I shall ever pray your long lifes and prosperity.

An appeal for a transfer

Sir,
Be not angry on one for thus troubling you for necessity has no law, and I am about to be dead if too long remaining here.

After completing my daily labor I am so much weary that I care not to consume any of the foodings prepared, and remain prostrate in my bed whole night, and ever by morning time the balm of sleep not always restores my vigorousness.

Mankind cannot for ever withstand such trouble without failing of his healths therefore your goodness may kindly transfer me at some easy place of work where I may be rested until recovery.

Never I before complain to your honor of the duty inflicted but in this time there is no excuse for my silence as, the failing health is explained in former part.

On the state of education in pre-independence era, Bainbridge writes, "After years of triumphant talk about educational progress, the Government of India is beginning to find out that " progress " of a particular sort is not, after all, a matter of rejoicing. I have been forced to the conclusion that those who are responsible for the educational condition of India are on a perilously wrong track, and that, unless they find the right road speedily, they will plunge the country into a complexity of woes."

The ambit and standard of education in India nearly a hundred years later is well below the 100 per cent mark.