British novelist Jack Higgins, whose real name is Harry Patterson and who is one of my favourite authors, wrote The Iron Tiger early in his writing career. It’s not one of his best novels I have read. Nonetheless, I found the story interesting because it is set in a remote and hostile part of the world that few authors would venture to write about—the India-Tibet border region; it is told in the backdrop of the impending Chinese invasion of Tibet; and it demonstrates the bravery of an officer of the Indian Army.

Most heroes in Jack Higgins’ novels are tough, dashing and oozing charm by the gallon. Jack Drummond is no less so. The former Royal Navy pilot and intrepid adventurer flies secret missions into Tibet, supplying guns and ammunition to the rebels in their fight against the Red Army. He is about to call it a day when a beautiful woman, a nurse, implores him to undertake one last mission—flying her and an ailing boy prince under her care out of the tiny Himalayan kingdom of Balpur and to safety.

But, before Drummond can fly out, the Reds invade the fictional kingdom, kill the young boy’s father, Old Khan, and vanquish his modest army, and destroy his charter plane. The Chinese want both Drummond and the Young Khan alive: Drummond, because he has been working for British Intelligence and could prove useful to Peking (now Beijing), and the Prince, because the communist government wants to quell the unrest in Balpur by installing him as a puppet king.

This is where the story begins. Over the next 50-odd pages, Drummond and his trusted friend, Major Hamid of the Indian Army, risk everything to save the woman, the prince, and a catholic priest from the pursuing Reds. Higgins’ description of the treacherous land, right up to the nearest Indian Army border check post, is so graphic as to give the impression that it is real and he has been there. Neither is true for Higgins wrote from his own research and imagination. 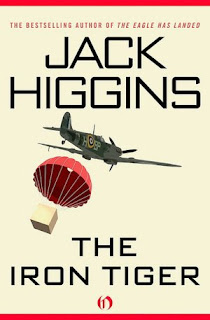 The Iron Tiger shows the Chinese in poor light, in context of Tibet and the invasion of Balpur, while India, though not part of the overall narrative, is seen as a friend with close links with the kingdom. Balpur might well be the Himalayan kingdom of Bhutan which has close ties with India. It is bordered by India on the east and China to the north. Higgins doesn't say anywhere.

Although there is plenty of action, in the form of gunfire and explosions, The Iron Tiger lacks the suspense of Higgins’ other novels like The Last Place God Made (1971) or The Eagle Has Landed (1975). The narrative tends to drag a bit in the latter half as Drummond and the others, aided for a brief while by Balpur army chief Sher Dil, struggle for survival through stormy mountainous terrain, as they make their way towards the Indian border.

As the lead character, Jack Drummond conforms to Higgins' devil-with-a-heart hero, though, he lacks the hardboiled image of some of his fellow mercenaries like Paul Chavasse, Sean Dillon, Martin Fallon or Harry Martineau.

The Iron Tiger, written in the author's easy going style, is a decent read but not decent enough to make it to the top of the pile of books to read. 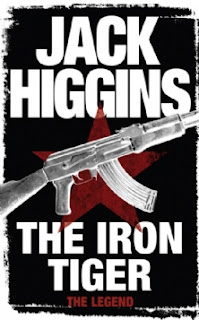 I will leave you with what Higgins has to say about The Iron Tiger, as reproduced from his "Forward" to a recent HarperCollins edition of the book (left).

“India has always fascinated me, although I had not visited the country when I wrote The Iron Tiger. I have since, of course, and was delighted to find that, thanks to careful research, I had got it right. The period during which I wrote the book, the early sixties, was one in which the Chinese occupying power treated the Tibetan people with great brutality and many thousands of those unfortunates died. The Chinese invasion of India (in 1962) hardly made them popular in that country and, because of this, The Iron Tiger was a great success with Indian people. However, a strange thing happened. It made me, as the author, highly popular for a while as for some reason people believed that I had simply fictionalised a true story about myself and that the events of the book had actually taken place.”