How many of you remember this beautiful film? It's my choice for Overlooked Films, Audio and Video at Todd Mason’s blog Sweet Freedom where you’ll find many other entries.

Some folks call them animals. 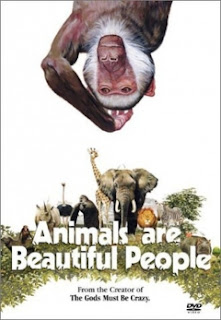 I have rarely seen an animal programme on television without humans in it. There is always an intrepid wildlife adventurer or photographer in close pursuit or lurking somewhere. I find this rather annoying. Just “shoot” the animals doing whatever they are doing. Keep the narrator and the music on but, for goat’s sake, keep off the savannah!

That’s why I liked Beautiful People (originally known as Animals Are Beautiful People) made by Jamie Uys, a South African filmmaker. There isn't a soul in sight on the Namib Desert where the animal documentary is shot. Only lots of beautiful animals on a vast and picturesque landscape exposed to the four elements of nature. 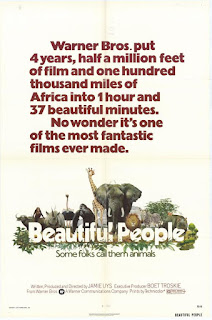 I saw this film a few years after it was released in 1974 and again in the nineties, but I don’t remember much. There are all kinds of animals, small and big, including a tiny dung beetle that doesn't seem tiny when it rolls a ball of dung all the way into its hideout, though not without hilarity.

As I read about Beautiful People on the internet, I rediscovered that it is, in fact, a funny documentary. In one scene around a watering hole animals quench their thirst and end up intoxicated, only to wake up with a hangover the next morning. The water gets fermented every time the fruit from the surrounding trees falls into the water hole.

Beautiful People, narrated by radio icon Paddy O'Byrne, is largely a one-man show: Jamie Uys not only wrote, directed and produced the film, he also took care of the editing, cinematography, and the music score. The cinematography is quite something as Uys captures the naked beauty of the desert land whose only inhabitants are the animals and the trees. Like the painstakingly shot wildlife scenes you see on television, Uys had to wait long hours to get the right footage of the animals and the way they cope with the harsh and unpredictable conditions of nature. In the end the sun rises, as it always does, and everything is back to normal.

Beautiful People earned Jamie Uys (below) the Hollywood Foreign Press Association award for best documentary. He deserved it. I would have given him another one for The Gods Must Be Crazy (1980), one of the finest slapstick comedies of the 20th century I have seen (my review). He plays the Reverend in a cameo role. He also made The Gods Must Be Crazy II (1989) which didn't hold as well. Sequels rarely do. 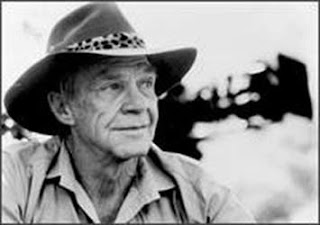 What makes this film extraordinary is the complete absence of special visual and sound effects and human encroachment, not counting Uys behind the camera. He did well to leave the animals alone.
Written by Prashant C. Trikannad at 04:11:00