There’s nothing like watching a good western on a Friday night. The next day is a holiday (if it's a second or fourth Saturday in my case), and you can wake up late. I did and here’s the proof of it, for Overlooked Films, Audio and Video at Todd Mason’s blog Sweet Freedom. 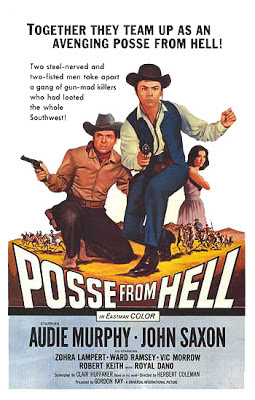 In a brief lifespan of 45 years, Texas-born Audie Murphy became a national hero and a screen icon.

Murphy is hailed as America’s most decorated combat soldier during World War II. His 33 medals include the Congressional Medal of Honor, the highest US military award for bravery, and similar decorations from France and Belgium. He is believed to have killed some 250 German soldiers and wounded and captured several others during the war.

After the war, the charismatic First Lieutenant in the US Army returned home to a second blazing career, this time in Hollywood where he proved his acting skills in over 40 films, mostly westerns, over a period of 20 years. He died in May 1971.

I would never have known of Murphy, the war vet and son of a Texas farmer, if I hadn't seen Murphy, the actor, in Posse from Hell. Although I have read a few reviews of his western films online, I hadn't seen any of them until last weekend; not even the more acclaimed To Hell and Back (1955) based on a book he wrote in 1949 detailing his wartime experience or No Name on the Bullet (1959) nicely reviewed by Ron Scheer at Buddies in the Saddle.

Murphy, who played Jesse James in his last film A Time for Dying (1969), was before my generation which is no escaping the fact that I could have known him better through his many films. After all, I am familiar with the celluloid works of his many contemporaries like John Wayne, Robert Mitchum, James Stewart, Yul Brynner, and Clint Eastwood. I attribute my singular amnesia over Murphy to his death at the young age of 45, taking him away from public limelight before his time. Few Indians would have heard of Murphy whose films were not broadcast often on the now-extinct TCM India. 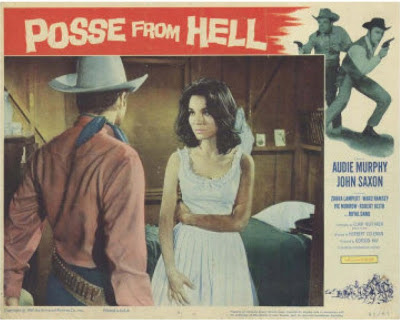 Well, there is always a first time for everything. This film was written by the US author of westerns, Clair Huffaker, who wrote the book of the same name. Many of his westerns, such as The War Wagon (1967), were made into films. Huffaker appears to be something of a cult figure in western fiction.

I caught Posse from Hell quite by chance. I was surfing YouTube for full-length western movies when this particular one, directed by Herbert Coleman, popped up. I clicked start and, in a few moments, I was transported into the middle of a broad street on a moonless night. Dark houses line either side of the street in the old western town called Paradise. Four riders come out of the shadows and dismount in front of a saloon. They enter the batwing doors, hold the saloon and its few patrons hostage, and then kill randomly. There is no escape. An angry crowd gathers outside, their guns cocked, ready to storm the saloon. The four escapees from a death cell kill the brave Marshal Isaac Webb (Ward Ramsey) in cold blood before getting away with their prize catch—money from the bank and a lovely girl called Helen Caldwell (Zohra Lampert). The killers have an evil motive: rape the girl. 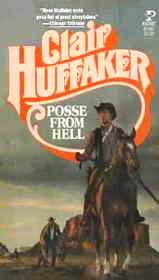 Banner Cole (Audie Murphy), the sheriff’s deputy, arrives on the scene, just in time to hear the marshal’s dying words: he wants Banner to find the murderers and recover the loot.

The deputy, as fearless as his boss, decides to organise a posse. But, before he does, he tells the whitemen bluntly that they are free to back out if they don’t have the stomach for the long and gruelling chase. Banner touches a raw nerve and a few men drop out. He then leads a six-member posse out of town whose folks think he is crazy.

The film ends in predictable fashion with Banner rescuing Helen and falling in love with her on one hand and gaining a friend for life on the other.


A few observations, in no particular order, won’t be out of place here.

1. Banner comes to rely on the lone half-breed in the posse more than he does on the whitemen. Johnny Caddo, played by Mexican character-actor Rodolfo Acosta, remains loyal to Banner and sticks with him up to the end. On his part, the deputy sheriff acknowledges Johnny’s worth and rues his death in an ambush. By a coincidence, I have been reading westerns in which Indians and half-breeds are shown in a better light.

2. The friend Banner gains in the hunt is Seymour Kern (John Saxon), a clerk at the bank, whose boss needles him into joining the posse to bring back the money. The city-bred Seymour is dressed in a suit and has never used a gun or sat on a horse before. He learns to do both in the posse. He also learns to fight fear and cover Banner when he needs it most. The posse makes a real man out of Seymour, a role that a young Saxon does justice to.


3. Banner is as hard on his critics as he is loyal to his men in the posse which in the end comes down to just three men—him, Seymour, and Johnny—who take on the trigger-happy devils in a do-or-die spirit.

4. On one hand, the film exemplifies courage, loyalty, and friendship; on the other, it exposes the cowardice and hypocrisy of a town whose deeds fail to match its words. Most of the men who were ready to storm the saloon refuse to join the posse for fear of their own safety. When Banner rescues Helen and sends her back to Paradise, a fate worse than her rape awaits her. The town is repulsed by the “used” woman but Banner provides more than a healing touch. The attitude of the town’s people reminded me of Hindi commercial cinema with its share of taboo and social prejudice. 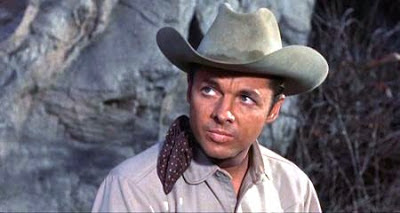 Posse from Hell lacks the sophistication of a Tombstone and Audie Murphy the glamour of a Clint Eastwood, but it more than makes up with its realistic plot and characters, and a touch of humour. I liked the scene where Banner pours spirit down Seymour's butt to give him relief from saddle rash (or that's what I think it is). Seymour has never ridden a horse before and Banner and Johnny look amused as he tries to mount his. The film is a traditional western as evident from Banner’s simple attire and a rather ordinary single-gun holster, the posse’s journey through barren and hostile landscape, and true-to-life gunfights where both heroes and villains get hurt. Murphy acts well as Banner Cole who, with his soft but firm voice, good nature, and doggedness, is likeable throughout the film.

A surprise element in the film was a young Lee Van Cleef playing sidekick to the gang leader though he is barely visible in the cameo role.