The Man Without a Country

Here’s an amazing story for Patti Abbott’s Friday’s Forgotten Books at her blog Pattinase, not to be confused with A Man Without a Country by Kurt Vonnegut (2005). 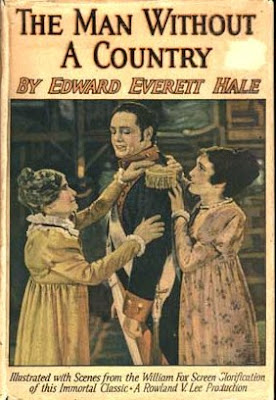 And Lieutenant Philip Nolan, the young and intelligent Union army United States Army officer, never does hear a written or spoken word of the country of his birth until his ignominious death.

To be sentenced to spend the rest of your life, a little over a period of fifty years, on the high seas, is a fate worse than life in prison. To spend it without hearing the name of America even once during all those years at sea is doubly cruel.

It was the price Nolan paid for his impulsive outburst against his country before Colonel Morgan, the president of the court, who was trying him and a close acquaintance, Governor Aaron Burr, for treason during the Civil War. In a fit of rage Nolan wished he never heard of America again, a wish Morgan granted him without hesitation, if only to teach him, and other American citizens, the lesson of a lifetime—love and cherish your country. The harsh sentence, we are told, has President Jefferson’s consent.

Edward Everett Hale, American writer and minister, has naval officer Frederic Ingham narrate Philip Nolan’s remarkable story, the 56 years he spent at sea, hopping from one ship to another, boarding up with new commanders and sailors who carry out the judge’s order in letter and spirit.

Nolan’s life aboard the naval ships are filled with many a poignant moment. For example, the “inmate” is treated well and has access to everything that a normal prisoner does except for one thing—the word ‘United States’ or any reference to the country is not to figure anywhere, in writing or in conversations. Thus, just as Nolan is reading an interesting piece of news, he suddenly finds a gaping hole in the paper. The officer assigned to him has cut it out because of a reference to America on the other side of the page. There is no end to the levels of censorship. 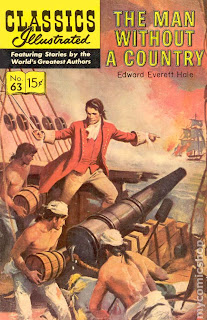 The young officer, however, endears himself to the sailing crew by making himself useful on board, by showing them how to handle a gun or use artillery, reading Shakespeare, teaching them dance steps, explaining mathematics, inculcating a love for reading books and, in one instance, serving as a Portuguese interpreter aboard a dirty little schooner filled with slaves.

As Nolan grows old and sick, the magnitude of his sentence begins to sink in and he pines for information about his country, even grows to love the land he once hated so much. Then, one day, he repents in total surrender, crying out aloud before his last commanding officer, Danforth, who takes pity on the sick old man and tells him all that has happened during the course of a half a century.

“Pray, what has become of Texas?” 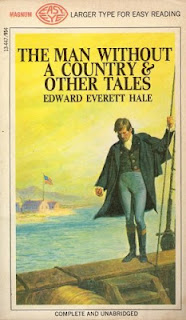 As Frederic Ingham, the narrator, tells us: “The reason he had never heard of Texas was that Texas and her affairs had been painfully cut out of his newspapers.”

Nolan dies a hero, his father's badge of the Order of the Cincinnati pressed to his smiling lips. Before he goes, Nolan tells Danforth to bury him at sea for “it has been my home, and I love it” and requests a tombstone either at Fort Adams or at Orleans, his epitaph reading:

“In Memory of PHILIP NOLAN, Lieutenant in the Army of the United States. He loved his country as no other man has loved her; but no man deserved less at her hands.”

I am sorry if I have given away more than I should have. It’s that kind of a story where you say more in spite of saying little. But fear not, there is much more to this 30-odd page account that could pass off as a short story or short fiction. For instance, the speculation whether Edward Everett Hale is telling a true story, whether the inspiration for it was the exiled anti-war pro-Confederate Ohio Democrat, Clement Vallandingham, whether the characters including that of Nolan are real, whether the events immediately preceding Nolan’s trial and sentencing actually happened, whether narrator Frederic Ingham really was a retired officer of the United States Navy, and whether The Levant, the last ship Nolan sailed on, was the same corvette that sailed from the Port of Honolulu in 1860 and was never heard of since. 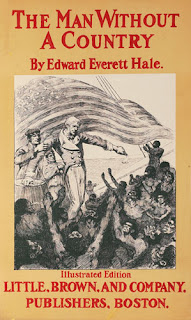 Hale keeps you guessing on all these aspects though there are several other interesting elements of the Civil War that you will enjoy reading and as you do, you will learn much about that tumultuous period in American history.

The Man Without a Country, which was first published anonymously in The Atlantic in December 1863, the year Philip Nolan died, has been adapted for films several times including a silent movie in 1917 and a three-act radio play in 1977. The story, now termed as a classic, made a big impact on America, in the sense that it influenced Americans into supporting Abraham Lincoln’s ‘Preserve the Union’ declaration and turned many against the secessionist Southern states. Apparently, Hale intended for the story to swing the tide in favour of the Union.
Written by Prashant C. Trikannad at 09:28:00