A slightly different take on a largely forgettable romantic comedy directed by Ivan Reitman and starring Harrison Ford as Quinn Harris and Anne Heche as Robin Monroe, for this week’s edition of Overlooked Films, Audio and Video at Todd Mason’s blog Sweet Freedom. 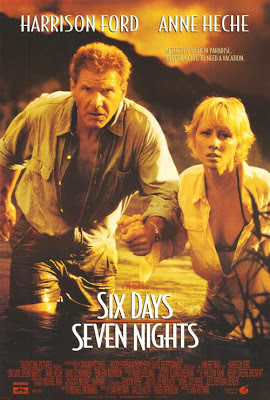 Robinson Crusoe stormed out of the Ziegfeld movie theatre in New York and phoned Daniel Defoe who at that precise moment was wiping Indian ink off his writing table. He was in a foul mood for he had spilled a large quantity of the infernal liquid on his first draft of Captain Singleton.

He picked up the instrument. “Hello! Who is this?” he said, sounding very annoyed.

The frenetic voice of his own creation at the other end startled Defoe.

“What is it, Robinson?” he asked in a somewhat measured tone.

“Mr. Defoe, sir, I have just been to see Six Days Seven Nights and it’s not fair, just not fair.”

“Quinn Harris had Robin. Chuck Noland had Wilson. I had no one!” he cried.

“Calm down, Robinson. What the hell are you blabbering about? Who is Quinn Harris? Who is…Whatshisname?”

“Chuck Noland, sir, from Cast Away.”

Defoe was bewildered. “Robinson, can you be more specific? Who are these people? Did they write the two books you mentioned?”

“No sir. Six Days Seven Nights and Cast Away are not books, sir, they are movies. Quinn Harris, a pilot, is the hero in one; Chuck Noland, a logistics guy, is the hero in the other.”

“What about it? What has it got to do with you?”

“It’s like this, Mr. Defoe. Their story is very similar to mine. They were both marooned on a deserted island. Bad weather caused their planes to crash. I, myself, as you know, was the victim of a shipwreck and I almost didn’t make it to…”

By now Defoe was irritated again. He cut in, “I am not quite sure about the first part, Robinson. However, you need not remind me how you landed on the Island of Despair. You know I put you there.”

“Indeed, I do, sir. Without you I should not have become famous and come into a good amount of money and bought my own island.”

“Then what’s your bloody problem, young man?” Defoe looked down and watched the spilled ink soak up the manuscript and blot out the words. He cursed under his breath.

“Did you say something, sir?”

“Nothing, Robinson. Get on with your story.”

“Like I was saying, Mr. Defoe, Quinn and Chuck are stranded on an island, in different times, of course. But they are not alone. Quinn has Robin and Chuck has Wilson.”

“Who the hell are Robin and Wilson?”

“I am sure you did not,” Defoe almost shouted.

“Robin is a beautiful girl in Seven Days Seven Nights, sir. She is the editor of a New York fashion magazine. She is in the plane with Quinn when it crash-lands on the island. They don’t like each other at first but seven days on the island is all it takes them to fall in love with each other.”

“Very touching, Robinson. And who might Wilson be...their dog?”

“Good lord, no sir! Wilson is a volleyball. He belongs to Chuck. He is the only friend Chuck has on his island in Cast Away.

When Defoe did not say anything, Robinson said, “Remember the two films I mentioned? You thought they were books.”

“Yes, I remember well, Robinson. Go on.” Defoe said, resigned to his fate and that of Captain Singleton. He wondered how he might revive the story of the exploits of the English pirate.

“Well, Mr. Defoe. You see, both Quinn and Chuck spent far less time on their islands than I did…Quinn a mere seven days, Chuck just four years…and yet they had someone to talk to, someone to fall in love with. I, on the other hand, spent twenty-seven years in isolation on the island, not a soul about me and only god in heaven.”

The line between New York and London went quiet for a few seconds.

“Are you still there, Robinson?” Defoe asked at length. He could hear deep sobs at the other end.

“Look Robinson, I am sorry. But you were not alone. I gave you animals...let me see, a dog, a couple of cats, sheep, goats, some fowl, and Friday.” Remember him?”

“I do, Mr. Defoe, you also gave me savages. Remember them?”