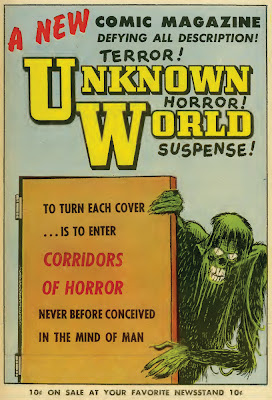 This is the ad that Fawcett Publications, Inc. of Greenwich, Connecticut, USA, published in its inaugural issue of Unknown World, released in June 1952, to advertise its new comic magazine. Will Lieberson was the executive editor and Al Jetter was the art editor.

According to his obituary in The New York Times, published January 17, 1995, William H. Lieberson, 79, was a successful director and playwright before he became editor-in-chief of Fawcett Comics, "where he oversaw the production of such monthly comic books as Captain Marvel."

Fawcett published comics across many genres including horror comics in the 1950s, a string of titles which, apart from Unknown World, also included This Magazine Is Haunted, Beware! Terror Tales, Worlds of Fear, and Strange Suspense Stories.

Lieberson and Jetter also collaborated on other horror comics from the Fawcett stable, notably This Magazine Is Haunted, which resembled EC's distinct brand of horror comics.
Written by Prashant C. Trikannad at 05:32:00